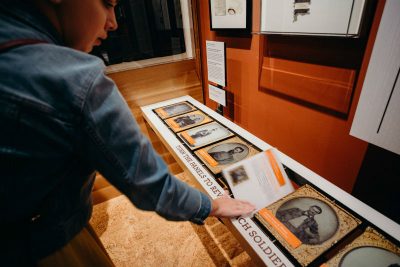 Emily Wild, a history graduate student, visits the American Civil War Museum in preparation for the installation of “Enacting Freedom: Black Virginians in the Age of Emancipation.”

The silhouette is more than a shadow in a current crowdfunding campaign. Its voice, in the form of a quotation floating on the wall above its female profile, is a revelation of what it meant to be African American during the Civil War and Reconstruction period.

Fannie Berry is the person behind the visuals that lead visitors through the “Enacting Freedom: Black Virginians in the Age of Emancipation” exhibit at the American Civil War Museum in Appomattox, Virginia.

“Glory! Glory! Yes, child, the negroes are free, an’ when they knew that they were free, they — Oh! Baby! — began to sing,” Berry exclaimed. “You are free, you are free. Such rejoicing an’ shoutin’ you never heard in your life.”

While doing research for the exhibit, a faculty-and-student team from Virginia Tech’s Virginia Center for Civil War Studies discovered the formerly enslaved woman’s interview transcripts from the 1937 Federal Writers’ Project of the Works Progress Administration. Berry lived through the Civil War and Reconstruction, and her words reveal what it felt like to be freed.

“I kept thinking about Fannie Berry,” said Paul Quigley, director of the center and the exhibit project manager, “and when the team realized she could be a guide for the exhibit — she could be the one element to pull the exhibit together — that was a magical moment.”

To help bring Berry’s story to life along with the history of emancipation in Virginia, the team has started a JUMP campaign. Funds from this crowdfunding effort will help Virginia Tech augment display materials to create a more engaging exhibition. Although the museum staff is creating the physical elements, the materials can be expensive. So part of the fundraising effort is to raise money for larger images and lasting text panels.

“The students put so much work into creating this exhibit and we want it to look great — visuals are so important to the success of an exhibit,”

Quigley said. Besides his role on the project, he is the James I. Robertson, Jr. Associate Professor of Civil War History in Virginia Tech’s Department of History.

To represent what the end of slavery represented to Virginians, the team members divided their research into different sections, including education, family, war and violence, work, religion, and political rights.

Not only did students in Quigley’s Civil War class participate, but so did students in Jessica Taylor’s public history course. Taylor, an assistant professor in the Department of History, provided her undergraduates with a challenge undertaken by generations of historians since the Civil Rights Movement.

“They confronted methods unfamiliar to many history students, such as analyzing huge amounts of census data and creating infographics,” she said. “They also made uncomfortable discoveries, such as how standards of living have changed little over time for some rural families, or how little money workers might bring home to their families despite long hours.”

Xavier Prevoznik, a junior majoring in political science and history, learned about collaboration and the merging of ideas.

“One of the most exciting things for me while working with this team was watching it come together,” said Prevoznik, whose research for the project focused on the family life of emancipated slaves. “We were all assigned different aspects of life for freed persons that, when separated, painted an incomplete story. With each team meeting, though, the picture filled in, and by the end, we had a comprehensive story.”

Another aspect of the JUMP campaign is to provide opportunities for schoolchildren to visit the museum and exhibition.

“The more we can do to make the information available to students at the elementary level, the better, if they’re from a school district that doesn’t have funds for extensive field trips,” Quigley said. “This could be a golden opportunity for them to visit the museum and get a new perspective on Civil War era history.”

To help schoolchildren understand the themes of the project, Emily Stewart, a graduate student in history, played a unique role with the team.

“I’ve been able to work alongside the American Civil War Museum staff to develop a curriculum framework that corresponds to the exhibit sections,” Stewart said. “My primary goal is to create content that classrooms can use to explore the prominent themes in the exhibits further. The museum intends the framework to complement, or supplement, the exhibit experience and correspond with Virginia Standards of Learning.”

The exhibit is now open in Appomattox and will run through April 2020.

For those wishing to support the project, the JUMP campaign ends April 21. The team said donations not only benefit Virginia Tech students and Virginia schoolchildren, but also help keep important history relevant and in the minds of future generations.

“Those 4 million formerly enslaved people worked every day of Reconstruction and beyond to make freedom meaningful in their own lives,” said Caitlin Verboon, a team member and postdoctoral associate in the Department of History. “Learning how they did that and what they thought was important can help us even today understand the larger meanings and legacies of the Civil War and Emancipation.”