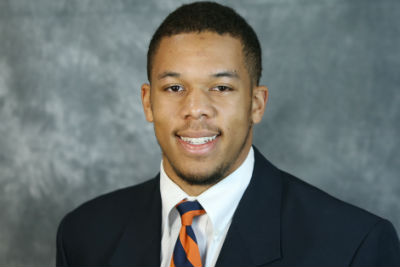 The NFL Draft is next week, and UVA linebacker Jordan Mack is looking to hear his name called, likely on Day 3.

The 6’2”, 230-pounder battled his way through an injury-riddled senior season, registering 69 tackles and 7.5 sacks, playing the last month and a half hobbled by an injured right ankle.

A projected fifth- or sixth-round pick, Mack would have benefited from a traditional pre-draft schedule of pro days and individual workouts, to be able to show teams how he is doing in terms of his recovery.

As it is, Mack is in Charlottesville, under lockdown, like the rest of us, trying to find creative ways to get workouts in.

“I’m pretty much all healthy right now,” he said this week.

Missing out on the usual pre-draft schedule “hurts,” Mack said, “because you don’t get to show your health, and actually talk and speak to teams as much as you would have wanted to.”

Where he is now in the process: “You just leave it all out there on a film, and that’s what it’s all about. You know, your film speaks volumes, and at the end of the day, that’s what you do, you play football. So, we have as much film as we have, and played as much ball that we’ve had. And then you really don’t worry about it too much.”

Mack has had virtual meetings with several teams, and he’s sent videos of his workouts, “just let him see my ankle, see my flexibility, my strength, and just basically saying now back to 100 percent.”

“Everything has been positive,” Mack said.

He’ll be leaving UVA football in a lot better shape than he and his teammates in the recruiting class of 2016 found it.

“It just meant a lot just to be there during a time to see UVA football, you know, from that 2-10 to a 9-5 season,” Mack said. “To be able to experience the highs and lows, that’s something that you will carry and cherish for the rest of your life. And some of that you can also come back and preach to the guys that I know it works, and that, you know, we came from 2-10, and we know that you’re going to go through a tough time, but, you know, if you listen to the process and trust the process, it can take you to places that are indescribable and leave you with a lifetime full of memories.”