John Avoli, the U.S. Capitol attack, and what politics does to good men 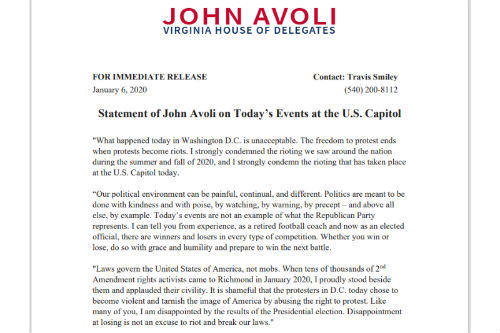 There’s a lot to unpack from the statement from 20th District Del. John Avoli condemning the attacks on the U.S. Capitol by Trump supporters.

For starters: I’m the one injecting the word “Trump” into this.

The statement from Avoli, a Republican who we presume will be running for re-election later this year, didn’t refer to the president.

“What happened today in Washington D.C. is unacceptable. The freedom to protest ends when protests become riots. I strongly condemned the rioting we saw around the nation during the summer and fall of 2020, and I strongly condemn the rioting that has taken place at the U.S. Capitol today,” Avoli began his three-paragraph statement.

The “rioting” – “attack on democracy” would be another way to frame it – was egged on by the president.

“Our political environment can be painful, continual, and different. Politics are meant to be done with kindness and with poise, by watching, by warning, by precept – and above all else, by example. Today’s events are not an example of what the Republican Party represents. I can tell you from experience, as a retired football coach and now as an elected official, there are winners and losers in every type of competition. Whether you win or lose, do so with grace and humility and prepare to win the next battle.

“Laws govern the United States of America, not mobs. When tens of thousands of 2nd Amendment rights activists came to Richmond in January 2020, I proudly stood beside them and applauded their civility. It is shameful that the protesters in D.C. today chose to become violent and tarnish the image of America by abusing the right to protest. Like many of you, I am disappointed by the results of the Presidential election. Disappointment at losing is not an excuse to riot and break our laws.”

Our retired football coach also seems to be particularly adept at mental gymnastics.

First he equates a violent mob breaching the U.S. Capitol as Congress was certifying the results of the 2020 presidential election, at the urging of the sitting president, the losing candidate, to the summer and fall protests of racial injustice around Virginia and around the country.

That’s dog whistling at its best right there.

You didn’t catch that?

“The rioting that we saw around the nation during the summer and fall” was the Black Lives Matter protests.

Then he tries to have us believe that the Second Amendment activists who surrounded the State Capitol during the 2020 General Assembly session practiced “civility.”

Walking the streets around the State Capitol in fatigues, strapped with semiautomatic rifles, is civil.

You know, not menacing, not threatening in any way.

People walking the streets of his neighborhood dressed like soldiers on a battlefield wouldn’t bother him in the slightest – any more than people taking their dogs for an afternoon stroll.

Avoli knows what he’s doing. He’s one of the smarter people I’ve gotten to know in my 25 years of news reporting, and actually, I’ve known him since high school, when he was the principal at the Valley Vocational-Technical Center, an early advocate of career and technical education.

He served with distinction as mayor of Staunton for 14 years, guiding the Queen City through a financial rough patch, leading the effort to reimagine the city as a tourist destination with investments in the downtown district that will pay dividends for decades to come.

After a stint as the executive director at the Frontier Culture Museum, helping get that organization on its feet financially, he ran for the 20th District seat in 2019, and won with 58 percent of the vote.

I’m almost inclined to say that I don’t know this John Avoli who now represents the 20th in Richmond, but again, I credit him with being a smart guy.

He’s not in the House of Delegates because he was an early advocate of career and technical education, because he led Staunton and the Frontier Culture Museum to financial stability.

He’s a state delegate because he got 74.1 percent of the vote in red-meat Augusta County, which just went 72.7 percent for, yep, you guessed it, Donald Trump, in the recent presidential election.

The easy way out is putting out a tepid statement condemning the rioting, blaming a fringe element, not attaching it in any way to Trump, equating what we saw yesterday to BLM, and hoping even that doesn’t offend the diehards.

The John Avoli that I knew wasn’t afraid to do the right thing.

This is what politics does to good men.