Joey Blount, Virginia D, looking to get back to the top 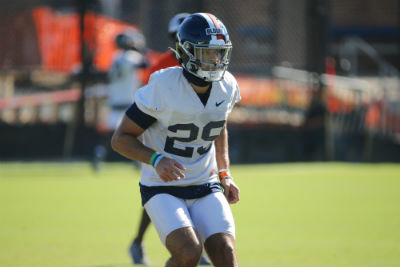 The Virginia defense, plugging holes from a rash of injuries, found itself getting lit up as the ‘Hoos played on the big stage late in 2019.

The silver lining is that the young guys who had to step up to account for the losses of stars like Bryce Hall and Jordan Mack got their baptisms by fire against three of the nation’s top offensive units.

“For teams we play, like Clemson, Florida, Virginia Tech, I think we’re carrying on that potential, that level of play, into this next season,” said senior safety Joey Blount, who was second on the team in tackles (95), with 3.5 sacks, three interceptions, six passes defensed.

“We plan to always carry a chip on our shoulder, which is never to back down from any challenge. I would say that the same the same energy is going to be felt this year that was brought in from last year. We’ve got a lot of new dynamic players this year. I’m just excited to see where we can take this team.”

Blount’s rather full stat line is a reflection of how Virginia schemes things up on defense. The 6’1”, 210-pounder is adept at stuffing the run, solid in coverage, and quick enough to get around the edge in blitz situations.

After the 9-5 finish in 2019 that ended with the program’s first New Year’s Six bowl appearance, the ‘Hoos aren’t getting that much love on the national scene, most likely because of the work that the staff will have to do to replace record-setting quarterback Bryce Perkins and productive wideouts Joe Reed and Hasise Dubois.

But the defense returns the bulk of its two-deep from the end of last season.

“The type of team we have this year is going to surprise a lot of people, because we’re underdogs, we’re overlooked right now. And we’re kind of looking like we’re taken out of the picture,” Blount said. “That’s all good, because we were that before the season last year, and look where that took us. But at the same time, I think that where we were last year is going to just, you know, help us with a stepping stone to be somewhere better this year.”

You can almost see the chip on Blount’s shoulder.

Something else that gets overlooked with this team: it’s been there, and wants to get back.

“I would have to say that last year was last year, and I mean, it was a cool experience to be in from there, but now with that we’ve had a taste of it, that level of play, that level of success, you want to be better than that, if not get there again. I want to play another Orange Bowl. I want to plan another big bowl game like we were. That was just an unforgettable experience,” Blount said.