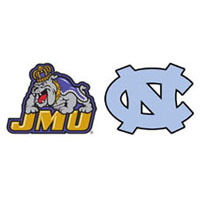 Making its 14th NCAA Tournament appearance in program history, the James Madison men’s soccer team dropped a 6-0 decision to North Carolina on Fetzer Field Thursday night in the first round of the tournament.

JMU ends its season at 10-8-4 with the loss. North Carolina moves to 13-5-1 overall and will take on 10th-seeded Charlotte on Sunday afternoon in the second round of the tournament in Charlotte.

Deeply entrenched in the match throughout the first half, the Dukes and Tar Heels were scoreless through the first 41 minutes before North Carolina got on the board on a deflected ball through the middle that Andy Craven put home for his first of three goals in the game. After a shot that got a piece of junior defender Bjarki Aðalsteinsson (Kópavogur, Iceland/Menntaskólinn í Kópavogi) and glanced to the left side of the box past redshirt-sophomore goalkeeper Kyle Morton (West Chester, Pa./Reed Henderson), Craven picked up the loose change and put his shot home into an open net.

Looking to climb back into the match early in the second half, the Dukes pressured to find the equalizer but North Carolina got its second goal in the 47th minute off the foot of Rob Lovejoy after a shot by Craven was stopped by Morton. Just 15 seconds after the goal, senior forward Josh Grant(Plymouth, England/Torpoint College) was sent off for a high tackle, reducing JMU to 10 men for the time being.

Just seven minutes after the red card was issued, Craven found the back of the net for the second time on a breakaway that he collected at midfield and went one-on-one with Morton. Eight minutes after the goal, redshirt-senior defender Tim Whitebread (McLean, Va./McLean) was issued a red card for a hard tackle in front of the JMU bench that brought the two teams together and reduced the Dukes to nine men through the last 27 minutes of the match.

Craven finished off his hat trick in the 70th minute with his 14th goal of the year. He was named First Team All-Atlantic Coast Conference after leading the conference with 25 points and 11 goals entering the game Thursday.

The Tar Heels finished the evening with goals from substitutes Alan Winn, his third goal of the season, and Glen Long, who scored his first of the year. Both goals were scored on redshirt-senior Bill Groben(Chester, Va./Thomas Dale), who was playing in his first game of the season.

The six goals is the most JMU has given up in the Tom Martin-era. Last time JMU gave up six goals came the year before Martin was hired as the head coach when the Dukes lost 6-1 to American on Oct. 29, 1985. The six-goal deficit is the largest margin of loss since JMU lost 7-1 to George Mason on Oct. 19, 1985. The six goals allowed is the most JMU has allowed in a game since Oct. 16, 2013, when the Dukes fell 5-2 to Hofstra.

Morton entered the match having not allowed a goal in 270 minutes after recording three shutouts in a row. His streak ended at 311 minutes.