Jim Bishop: Who has disabilities? We all do! 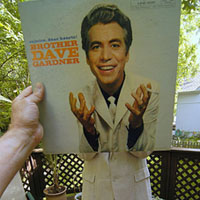 “Don’t tell me about your doubts, I’ve got enough doubts of my own. Tell me something you BELIEVE in,” goes a line in a sketch from the late standup comedian Dave Gardner (1926-1983).

“Brother Dave” served up a strange mix of offbeat, socially-aware humor delivered in a stream-of-consciousness Southern storyteller style. I was introduced to this funnyman via several RCA Victor albums from someone on our dorm floor. Some of his jokes and anecdotes would be deemed politically incorrect today, butt they remain hilarious nonetheless because many of his observations, stated in his terms, “Hit the ten penny finishing nail with a greasy ball peen hammer.”

The Tennessee native and one-time seminary student somehow connected with this young, questioning college student – “All ye who are with it, without out, thought of and returned to it, bless thee,” he said. “Everything you have ever done in your whole lifetime in the physical vehicle on this plane has brought you to this instant. Now ain’t that weird?”

I thrived on the idiomatic phrases and wacky stories that emanated out of that portable record player in the third floor Maplewood lounge more than 48 years ago. We could use an uplifting dosage of Bro. Dave’s “celestial” spirits in these uptight, solemn times.

Of things I believe, a paramount conviction is that every person has been placed on this life for a specific purpose. Every life has meaning, and each of us possesses at least one innate ability – usually more – that our Creator intends us to use for the greater good of humanity.

We may not even quickly identify what our special ability is. What a blessing when others come along at crucial times to help us discern that potential and help motivate us to develop and nurture it.

The flip side, however, is that each of us has disabilities, but whether we recognize that depends in part on definition. I’ll start with this example, emanating out of that dark, forlorn and enigmatic realm occupied by those of us who are, and probably always will be, mechanically inept. On top of that, I’m technologically challenged as well.

When God was distributing mechanical aptitude, I must have been stuck in the bathroom, trying to keep the toilet from overflowing.

I develop a severe case of mechanical madness every time I open a box that says, “Some Assembly Required.” Or, I close the sliding screen door at the entrance to our sun room and it slips off the track. When Mr. Fixit heads out to deal with some household calamity, the only tools I carry are a screwdriver and a roll of duck tape.

Bro. Dave said it well: “James Lewis – get away from that wheelbarrow! You know you don’t know nothin’ about machinery!”

My wife has noted many times that I don’t even see things that need repair, like a leaky faucet, a squeaky door or torn window screen. I pretend that the ailing object will somehow heal itself if I ignore it or have faith sufficient to move metaphorical mountains.

I confess to other disabilities as well: shying away from card games that require quick thinking – like Dutch Blitz, Rummy or Pit – or those that require considerable patience and ability to concentrate – like Chess or Monopoly. (I once had a board game devised by “the usual gang of idiots” at MAd Magazine. At designated intervals, players would move one chair to the left, and the object of the game was to be the first to lose everything –now that’s my kind of amusement).

I have a propensity to move my mouth – at a volume level where the whole room can hear – before my brain is fully engaged. This proclivity translates to my computer keyboard as well.

Another shortcoming – a short fuse when other drivers float along in the passing lane of the interstate or when someone pulls out right in front of me on the highway, then immediately slows and signals a left turn in the face of oncoming traffic. When I verbally critique such stunts, my dear wife replies, “Keep your comments to yourself, J. Vernon” (my late dad).

I also lack patience in mile-long lines or other settings where I arrived in good time only to be told, “Have a seat and wait” for an eternity.

Get the idea? It’s those rough, ragged, sharp, dull, chipped or cracked areas of my inner and outer being that require continue shaping and molding, like clay in the Master’s hands.

If we’re honest, each of us can name his or her chief disabilities. You may have a specific, practical game plan for dealing with them. Regardless of our stage of life, we shouldn’t be content to stay the way we are or shrug and say, “This is just who I am.”

Whatever disabilities and related shortcomings we grapple with, they needn’t remain liabilities if we draw on resources, both from within and beyond ourselves, to deal with them. But, the starting point is with us. Don’t blame your parents, your environment or other factors. Responsibility for change lies within; it is ours.

Would Bro. Dave agree? He’d probably tell me to relax, have a moon pie and an “Ar-uh-Cee” (R.C. Cola), while asserting, “Don’tcha know a diamond ain’t nothin’ but a piece ‘o coal that’s stuck with it?”

Jim Bishop is public information officer at Eastern Mennonite University. He can be contacted at bishopj@emu.edu.