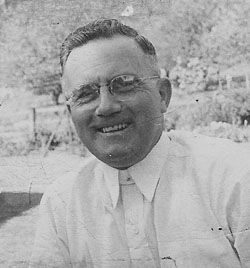 He wasn’t a coal miner, even though he lived in West Virginia, but his life was cut short early. Like the legendary Big John, he was an in-charge type, a striking figure who commanded respect.

When Robert P. Dayton of Mineral County, W.Va., spoke, people did listen. I know I did, even as a youngster, which is when I came to know him.

“R.P.,” as some called him, was my grandfather, my mother’s father.

My brother Eric recently sent me a photo he obtained of Grandpa, apparently taken on the Dayton homestead in Fairview Valley around 1950. It captures the character of the man as I remember him – a mischievous twinkle in his eye, a radiant smile, a commanding presence, yet with a gentle spirit.

Although he came across as a no-nonsense type and a disciplinarian, he had to be in riding herd on a family of nine children, my mom, Ann Dayton Bishop, being the oldest sibling.

Grandpa Dayton came from a Methodist Church background and was ordained to the ministry at the Pinto (Md.) Mennonite Church in 1930, where he served as an associate pastor for many years and spoke frequently in congregations in Allegheny Mennonite Conference and other denominations. He did this while overseeing the Dayton farm, which bottled and distributed raw milk, “Nature’s Natural Nourishment,” on a dairy route that continued until 1963.

Virginia (Gina) Moreland, my mom’s sister, who still resides in the village of Pinto, confirmed my youthful recollections of Grandpa Dayton – a “handsome man, outgoing, precise in speech and generous.”

“No matter how many people were gathered around the farm table at mealtime, there was always a place for one more,” Aunt Gina said in a phone interview. “Dad would frequently take meat and farm produce to the widows and needy persons around Fairview Valley. He was well-known and respected in the community.”

Grandpa Dayton dealt with health issues most of his adult life, suffering from intestinal problems that a series of surgeries didn’t resolve. Today’s medical advances likely could have prolonged his life, but he died May 29, 1953 at age 59. Grandma Rhoda Yoder Dayton remained on the farm with the help of her sons for a number of years before moving to an apartment in Pinto, where she died peacefully in 1986 at age 84.

Grandpa Dayton’s photo, that now hangs on the side of our refrigerator, helps remind me of what a father is called to be – a leader, in control and yet not domineering, loving but no soft touch, forthright and yet compassionate. During the brief time I knew him as a child, Grandpa influenced how I would one day approach parenting more than I ever realized.

It took me awhile to grasp that while the role of “father” may have some prescribed mandate, it doesn’t come with a concise instruction manual – do this and that and you’ll always be successful.

It starts rather abruptly with the arrival of the child that he turns your world and your schedule upside down. Firstborn daughter Jenny, who skyrocketed onto the scene on a hot 4th of July in 1972, now knows what I mean in this regard, being a parent herself.

It doesn’t end, either, when your children leave the nest for whatever reason, but at that point I found myself assessing my parental role anew and wishing I’d done some things differently along the way.

I’ve now gravitated into the grandparenting stage of life with six grandkids all living in proximity. Anna and I interact with and “parent” them regularly, spoil them and then return them to their parents to undo the damage.

Here I am, at age 65, still a father to Jenny and Sara and a grandfather to Heather, Collin, Dylan, Jacob, Grant and Megan. I will offer counsel to them – if they want it – and unconditional love to all of them as long as this family circle makes ’round.

As country singer-songwriter George Strait so aptly put it and my Grandpa Dayton exemplified so vibrantly. . . It’s a love without end, amen.”