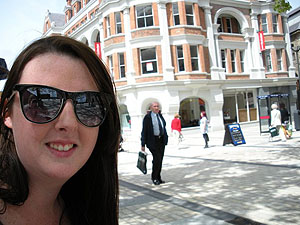 At the end of the school year, all I could think about was how this was my last summer as a college student. Next year I graduate and will be out in the big bad world trying to fend for myself, so I thought to myself, This better be the best summer ever. About two weeks after school ended, I packed up my stuff and traveled with 26 students and two professors to Ireland.

I go to EMU in Harrisonburg, and in order to graduate all students must complete a crosscultural experience. These experiences are usually led by professors and range in staying anywhere from Washington, D.C., to China. You could go for as long as a semester or as short as three weeks. I chose to go to Ireland and do a six-week-long experience.

Never had I been out of the country before, and I was pumped that one of my best friends got into the program as well. Going into the program blind, I thought we would have to write papers, take tests and have lectures the entire time I was there, since I am getting six credits for going. I was so wrong. While in Ireland, I took one test, on the geography of Ireland, had to write journals, and go to just a few lectures. Two of the lectures included traditional Irish dancing. Although our days were not filled by sitting in a classroom listening to a professor, we learned more by exploring the city and talking to locals about the history than we ever would have in a classroom.

We actually stayed in five different cities throughout Ireland and Northern Ireland. We stayed for three weeks in London Derry/Derry, which is where we did the five lectures. By day, we were tourists sightseeing, going to castles and the Cliffs of Mohr. By night, we were Americans at the pubs dazzling the locals with our foreign accents.

I thought our accents would be harsh to them and that they would hate it. Turns out it was just the opposite. No matter if we were walking down the street or in the bathroom, someone would always stop and ask where we are from. Then they would talk about how they like Obama and how our soccer team is not that good. Although London Derry/Derry was a small town, and we had to walk forever just to get to one of the pubs, it was one of my favorite places. We got to know some of the locals, some of which we still keep in touch with, and got to know the town.

While staying in these different places, we would take buses to nearby counties, their version of states, and see what each of those had to offer. Sometimes we would end up riding on a bus for hours just to go to the beach and hang out there, other times we would wind up exploring ruined castles that were nestled between the hills of Ireland. One time we came across a ruined abbey, and for some reason or another some of the group decided to sing a hymn right there in the abbey, while others of us opted for singing “Sexyback” by Justin Timberlake.

The groundskeeper shot us a look from Hades, which we took to mean we weren’t singing loud enough, so naturally we sang louder and became the obnoxious Americans who sing inappropriate songs at national monuments.

Our last stop was in Dublin, and we were there for five days, staying at a hostel that was right in the middle of everything. It was only a short walk to Grafton Street, where all the shopping is, and right beside the legendary Temple Bar.  Luckily, my 21st birthday just happened to fall on the only Saturday we were in Dublin. Needless to say it was the best birthday, ever complete with a tour of the Guinness Factory and dancing.

We left Dublin sad and disappointed to go back to reality where we have to work and where it is frowned upon to get a beer before 3 p.m., but as they say, all good things must come to an end. It was a fantastic trip all around and definitely made for the best summer I could have ever dreamed for.

Jenny Hypes is a summer intern and a senior at Eastern Mennonite University.