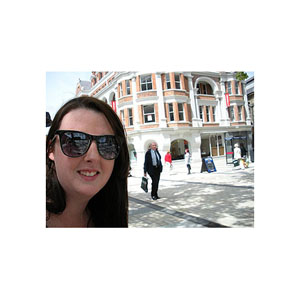 One day earlier this week I was sitting in the Augusta Free Press office when the editor sent me a link to a story on msnbc.com. The story was about how most college freshmen think e-mail is too slow, have never worn a wristwatch and basically didn’t know Clint Eastwood was an actor before he was a director.

First off, this is completely ridiculous to me, because I am literally only three years older than these young adults, and I have done all the things they think of as ancient. I am 21 years old. I should not be made to feel old by the fact that these kids have never had to use a phone with a cord or that they don’t remember when the Internet first took over the world. Because they do not remember those things, I am sure they don’t remember fact that a Mac computer, before it was abbreviated, was called a Macintosh, and floppy disks are something that should be in a museum.

The world these kids live in is one where Internet has always just been there for their convenience, and MTV has always played reality shows. I remember the days of dialup Internet and my parents yelling at me for being on AIM and taking up the phone line. I also remember the days when MTV and VH1 used to play music videos all day every day, and there was no such thing as a reality show. Back when TV shows had scripts and “The Simpsons” ruled over “Family Guy” and “Doug” and Bugs Bunny were the go-to cartoons, those are the days I grew up in.

Although those things seem to be something everyone should remember firsthand, it is something these college freshmen do not unless their older brother or sister recorded it on a VHS tape, something that is probably also foreign to them. Yes, I am only a few years older than these teens, which is why this is so strange to me. Now I understand why parents think it is hard to bridge the generation gap and try to understand where they are coming from; it’s because the world is changing so fast that it is even hard for young people to keep up with.

The trends change every season. There are fashion shows that are promoting spring attire in the fall just to keep up with the evolving world. Who would have guessed 10 years ago that Internet would be as widely accepted and used as it is now, let alone have the ability to access it and send e-mails on our phones? I feel stressed just thinking about ways to try and keep up with the ever-changing trends. I feel even more stressed thinking about how in just a matter of years things I do on a daily basis are going to be replaced by maybe working with something that has yet to be invented. I blame Bill Gates for the generation gap I am facing with people three years younger than me.

Column by Jenny Hypes. Jenny can be reached at jenny.hypes@emu.edu.