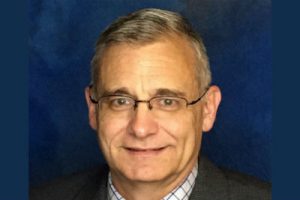 Jeff Johnston has been named the director of public works for the City of Staunton, succeeding Tom Sliwoski, who retired after 22 years of service with the city.

Johnston will assume his new role with the city on September 28.

Johnston brings a total of 34 years of public sector public works experience to the position, with 23 years as an officer in the Navy Civil Engineer Corps, transitioning in 2009 to senior management positions in civil service.

“With his extensive background and proven leadership and technical skills, Jeff will make an immediate contribution as a member of our team in the critical position of director of public works,” City Manager Steve Rosenberg said. “We are very pleased and fortunate to have someone of his background and caliber join us in Staunton.”

In his most recent position, Johnston served as the director of public works for the Army’s 81st Readiness Division at Fort Jackson, S.C. As director, Johnston oversaw the real property management, maintenance and operation of and environmental services for over 8.5 million square feet of facilities at over 300 separate sites across nine states and the Commonwealth of Puerto Rico, supporting nearly 50,000 Army Reserve soldiers and their families.

He previously served as the staff civil engineer for the United States European Command, in Stuttgart, Germany.

Johnston graduated from Colorado State University with a bachelor’s degree in civil engineering. He is a registered professional engineer in the State of Florida and a member of the American Public Works Association.

“I am thrilled by the opportunity to work for the citizens of Staunton, and to be part of the team at the Public Works Department. My family and I are equally excited about calling such a beautiful and friendly city ‘home.’ I wasn’t fortunate enough to be raised in Staunton, but I’m glad I can provide my children with that opportunity.”

Johnston, his wife Harriot, and their family will be relocating to Staunton in the near future.  Originally from Arlington, Harriot is a graduate of the University of Virginia and a fellow Navy veteran.

The Johnstons have four children: Dais (22) who is an entertainment writer; Henry (20) who is a senior at Emerson College studying visual arts; Jackie (18) who is a freshman at Louisiana State University studying economics; and Chester (15) who is a high school freshman.