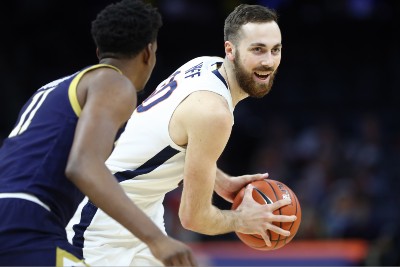 Jay Huff had 18 points on 7-of-13 shooting to lead UVA to an 80-68 win over Notre Dame on Wednesday. Photo courtesy Atlantic Coast Conference.

You know how Tony Bennett is. Sure, hit threes, whatever. But do something on defense, and Bennett will literally jump for you.

Jay Huff brought Bennett to his feet, moments after his fourth three of the first half, and, no, it wasn’t the three that got Bennett’s juices flowing.

It was Huff taking a charge on Notre Dame point guard Prentiss Hubb 40 feet from the basket.

Bennett could’ve dunked a basketball – OK, that’s hyperbole, but still, he was pretty worked up.

“What was going through my mind when I took the charge especially was, this is more charges than I’ve ever taken in my life,” said Huff, who finished with a game-high 18 points, on 7-of-13 shooting, in the 80-68 win on Wednesday.

“I never intentionally took charges in high school, college – none of them have been intentional. But it’s kind of worked out where I’ve gotten a couple, and I’ve gotten kind of lucky,” Huff said.

What limited his minutes his first two seasons was his limitation on defense – not so much as a rim protector, because at 7’1”, Huff has always been otherworldly there, averaging 3.6 blocks per 40 minutes for his career, per Sports-Reference.com.

It was his inability to anchor the defense at the five in pick-and-rolls that would get him quick hooks.

Bennett has de-emphasized the hard hedge on pick-and-rolls of late, not because of Huff, but because he has inexperience behind Huff in the Pack Line – guards Sam Hauser and Trey Murphy III, both transfers in their first year as starters at UVA, have yet to adapt to their responsibilities in defending the back end of the screen-and-roll.

As it would turn out, Huff picked up that charge on Hubb hard-hedging on a screen-and-roll.

For all the histrionics from Bennett over the charge call, a similar call on a hard hedge in the final minute of the first half of the UVA-Notre Dame game two weeks ago went against Huff, who picked up his second foul on that one, ultimately contributing to the foul trouble that relegated him to the bench for an uncomfortably long stretch in what turned into a gritty 66-57 Virginia win.

My thinking, and keep in mind, I’ve yet to coach a team to a national title, but still, maybe having your 7’1” sharpshooter trying to draw charges 40 feet from the hoop isn’t the key ingredient in the secret sauce.

Hey, how about how Bennett is using Huff on the offensive end?

Bennett almost completely went away from his favored mover-blocker motion offense Wednesday, in favor of a high-post attack focused on getting Huff the ball at the top of the key, taking advantage of his abilities as a passer and, of course, a long-range shooter.

“I would probably say that around that area is my favorite spot,” Huff said. “I took a bunch of those back in my high school days. That is just where they kind of show up in the offense that we’ve been running.”

“It stretches the offense,” Bennett said. “They play the five, and anytime you do that, you have to come out. So, it opens the floor for other postups or drives. We’re a different team this year, so we’re trying to utilize different guy’s strengths. You know Sam (Hauser) can stretch it, and certainly Jay, but that was nice. There’s real nice ball movement and rhythm threes. That obviously is a something that he can do so. I think it sets up the rest of his game. We say to have balance in your game, and I think that’s what he’s learning to do.”

Deep down, of course, it was the charge that got Bennett’s attention.

Huff is on a different plane talent-wise from Jack Salt, but that charge was him channeling Jack Salt, and getting into his coach’s good graces.