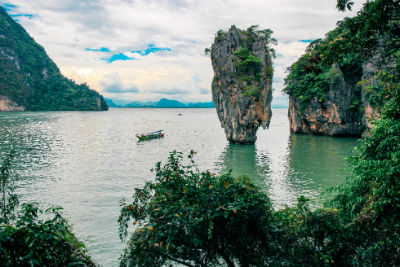 There are only a few natural landmarks around the world that owe their fame entirely to a single movie, and a James Bond Island tour’s cost makes this sight well worth seeing.

Every James Bond-loving movie buff knows this island on sight, even though there is no actual radar dish poking out of the top of the island. It was, of course, made famous in the 1974 movie “The Man with the Golden Gun,” starring Roger Moore and Christopher Lee.

The island’s real name is Khao Ping Kan, but it’s known around the world by its nickname and has been included on tours of Phang Nga Bay since shortly after the movie’s release.

There are a couple of reasons why this island is well worth visiting. With many tour companies vying for the tourist trade in the Phuket area, a James Bond Island tour’s cost is remarkably affordable. An entire day’s trip to the island on a large comfortable boat can cost as little as THB 1,400 or around US $44. The tour includes ground transfers from your accommodations, a meal and soft drinks, a morning of canoeing (lifejackets are included) and visiting local sights, and personal insurance.

But the main reason this tour is worth taking is because of the natural beauty of the islands of Phang Nga Bay. James Bond Island itself pales in comparison to some of the islands surrounding it. Sure, it’s fun to see an iconic location in the flesh, but if the movie producers had shown more of the surrounding area, the area would have been flocked with visitors from the film’s release.

The tour organizers are happy to show off the other islands as well. On your way out to James Bond Island, you’ll stop at Panak island for a bit of canoeing and explore a local bat cave. You’ll also visit one of the most pristine marine national parks in Thailand, Hong Island, and enjoy more canoeing around this paradise.

After the morning of exploration surrounded by ancient, natural beauty and turquoise waters, you’ll partake of a gourmet lunch aboard the boat as the boat heads to James Bond Island.

Get Your Cameras Ready

Once you arrive in the vicinity of James Bond Island, you’ll be dropped off at the nearby beach, which served as the camera angle in the movie. You’ll have the exact viewpoint of the island that the movie showed, so be sure not to forget your cameras.

You’ll be joined by other tourists, some of them, no doubt, re-enacting the poses of Roger Moore and Christopher Lee on the same beach back in 1974.

End the Day with a Swim

There’s still time for an afternoon swim before heading back to Phuket at the end of the day. Avid snorkelers would be well-advised to bring your snorkeling gear along with you on the tour. The visibility of the calm waters surrounding these islands and the abundance of the colorful marine life will serve to cap off an excellent day’s excursion.