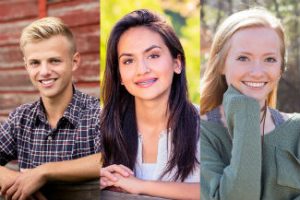 Each year, Eastern Mennonite University engages in a rigorous process to select recipients for the prestigious Yoder Scholarships. Established in 1993 and named for alumni Carol and Paul R. Yoder Jr., the scholarships cover full tuition and include admission into EMU’s Honors Program.

This year, the Yoder Scholarships were awarded to Isaac Alderfer of Broadway, Virginia; Hannah Leaman of Bakersfield, California; and Allison Shelly of Collinsville, Mississippi. They were chosen from a field of 52 applicants who had an average SAT score of 1332, average ACT score of 31 and an average high school grade-point average of 4.06.

The graduation rate for EMU honor students has been at 100 percent in recent years, with many completing more than one major. The students receive unique academic and co-curricular opportunities along with intensive mentoring from faculty.

For Isaac Alderfer, international missions work is more than a long-term possibility. Earlier this school year, he traveled Kenya to work on a water filtering project at a school. The experience was part of a focus he has been researching (and is continuing to work on) at the Massanutten Regional Governor’s School for Environmental Science and Integrated Technology.

“We are not called to be only members of our local community, but also of the global community,” he said – a perspective that is part of his draw to EMU, where the cross-cultural program “demonstrates these ideas and values.”

Alderfer is also drawn to EMU’s focus on the “whole person,” he said – and its core statement from Micah 6:8: “What does the Lord require of you, but to do justice, love mercy, and to walk humbly with your God?”

This verse, he said, “speaks volumes about how EMU is committed to making a difference and addressing the big issues that need to be talked about.”

Alderfer plans to major in environmental sustainability, and sees EMU’s liberal arts community as a place to “formulate a holistic education experience.” That for him will include Spanish, art, engineering and photography courses.

He also looks forward to continuing in track and cross country, to “engaging my own spirituality at a higher level” and to connecting to other students and his professors.

Hannah Leaman didn’t think she’d attend EMU – but when she started thinking seriously about colleges, she “realized it had everything I was looking for,” she said.

It’s not her first mind change, as she decided to major in math education only after years of rejecting that career, which at one point she ranked as “the last thing I wanted to do.”

Now, though, she said, “I am so passionate about learning that it flows out of me in the form of teaching. I want everyone to love learning as much as I do.”

Leaman’s list of why she was drawn to EMU has continued to grow, she said. The campus is beautiful, small and easily maneuverable, for starters, but she is also eager for mentorship from professors and to experience the diversity and complexity among her peers.

While she does not identify as Mennonite, Leaman said, she connects deeply with peacebuilding and service, and is drawn to EMU’s emphasis on sustainability.

And she’s “beyond excited” about joining a choir or vocal ensemble at EMU.

“I am extremely passionate about music,” she said. “I prioritize it to maintain a healthy mental state.”

She has more passions, too. At her church she helps to brainstorm sermon topics, organize events and lead music. She teaches during vacation Bible school, loves planting trees and beautifying neighborhoods, and has traveled to Mexico to help build a home.

“Volunteer work,” she said, “opens my eyes to the perspectives I am fortunate not to experience.”

Allison Shelly knows one thing for sure: eventually she wants to work “directly with people in some way,” whether in education, social work, or something else.

A liberal arts college is the right setting for her exploration of her many options, she reflected recently – and as she visited other colleges she came to appreciate EMU “more and more.”

“I see EMU as a place that is going to open up new possibilities I haven’t dreamed of yet,” she said. “I am especially drawn to the beauty of the Shenandoah Valley and the authenticity of the people that make up EMU. As a person with a lot of questions, I also really appreciate how EMU seems to be a place that encourages and fosters curiosity both on a personal and global level.”

Shelly has served her church with childcare, photography and music throughout high school, and has traveled to Zambia for five-weeks with Teen Missions International and to Peru to help with a youth camp.

At EMU she hopes to become active with campus ministries, intramural athletics, student leadership and more, and is looking forward to studying photography and traveling for her cross-cultural.

After graduating, she sees a variety of possibilities, from living in another country to “working in an at-risk school in Mississippi,” she said.

“I’m optimistic,” she said. “Ultimately I hope to end up in a place where I feel like I am serving God and others.”