Is Matt Johns ready to take the reins at QB for UVA? 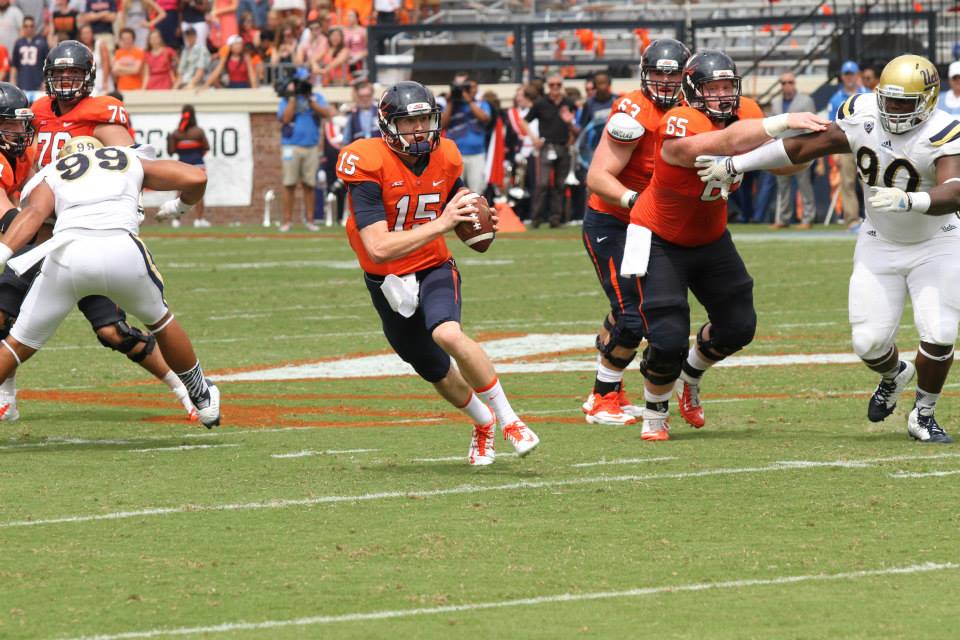 UVA coach Mike London and wide receiver told their versions of the story of the day that Matt Johns made his debut as the Virginia quarterback.

“When he came into the UCLA game, we’re losing 21-3, and he’s coming in there smiling, like, Let’s go score, let’s go have some fun, let’s move the ball. I’m like, does this guy know what’s going on right now? We’re getting whupped,” Severin recalled.

“Two plays later, throws it to me for 30 yards, and then next play throws one deep to Andre Levrone for a touchdown, now it’s 21-10. Next drive, comes back, throws another touchdown. Now we’re down by four, and it’s like, now we’re creeping up a little bit. He just has that, almost moxie, and it’s kind of crazy. That’s just who he is. He just flat-out competes.”

“When he went into the game, right before he ran onto the field, I grabbed him by his arm and said, Matt, are you ready for this? And he grabbed me by my arm, and said, I’ve been ready for this my whole life. It was almost like a ‘Rudy’ moment. He was so ready to go. That type of young man is very competitive. Our players, they rally behind that type of mindset,” London said.

Johns was named the starter for 2015 at the end of spring practice after starting three games in 2014, supplanting the incumbent starter, Greyson Lambert, who after losing the starting job decided to transfer out, eventually landing at Georgia.

The battle between the two in the spring, London famously said at the end of the spring practice period, wasn’t even close, though on that point the coach and his offensive coordinator, Steve Fairchild, didn’t entirely seem to agree.

“Coming out of spring, we literally charted every rep. Seven-on-seven, one-on-ones, half-line, team, everything. And at the end of the day, when you evaluate completion percentages, mental errors, those things like that, Matt was – it wasn’t close,” London told reporters this week at the 2015 ACC Football Kickoff, trying to explain the apparent divergence of opinion.

“The two of them in terms of competing, in the film room, wanting to be the leader of the team, wanting to be that guy, obviously those situations were close. It could have been a better job in terms of communicating that to you guys, because obviously when the depth chart came out later, and when Greyson was leaving, what was said back then was, I could understand that as being misconstrued in a certain way. Steve and I are on the same page, though. There’s no disagreement as far as who the quarterback is.”

The quarterback situation became even more of a sideshow after Lambert left, and third-stringer Corwin Cutler announced on social media that he was leaving before returning a few days later, and then later on Connor Brewer, a former hotshot recruit at Texas who transferred to Arizona before deciding to transfer again, announced his intent to sign on with Virginia.

Brewer is still finishing up his degree at Arizona, according to London, so the coaching staff hasn’t been able to interact with him with regard to football, though London did get a chance to talk with Brewer’s former coach at Texas, Mack Brown, a golfing partner of London’s at Pinehurst over the weekend.

“We had a chance to talk about Connor a little bit. Let’s just say we’re excited about a skillful player, a guy that’s very highly talented. We’ll have the ability to see him here real soon,” London said.

Brewer, as a veteran of two different high-level programs, “is a guy who has been in a lot of systems, but he’s got the verbiage, he understands coverages, does so many things that an older quarterback knows and does and has done, because it’s not like a redshirt freshman that is coming in. He’s a guy that has been around some places and has a high football IQ as well,” London said.

As for Cutler, a touted high-school recruit, all seems to be forgiven after his awkward departure and return.

“Obviously social media is something that when you say something, you put it out there that you can’t get it back. The ability to communicate and sit down face to face and talk ultimately proved that that’s the way you should handle things,” a terse London said in reference to the Cutler situation.

“I can tell you right now that Corwin is happy, he’s participating in our team drills, seven-on-sevens, and those matters have been rectified. I love the young man, and he’s going to be a very good player for us,” London said.

But all of that having been said, Johns is the guy. London made it clear that Johns is not only number one on the depth chart heading into the start of camp, but that there is not going to be a battle for the top job once camp starts.

It’s Johns’ team heading into the season, and to that end, Severin, who led the Cavs in 2014 with 42 receptions, 578 yards and five receiving touchdowns, couldn’t be happier.

“My high-school football coach always said, If you have two quarterbacks, you have no quarterbacks. I do believe that,” Severin said. “It worked somewhat well last year, obviously not well enough to get the job done. It’s good that Matt Johns is our guy, and we’re going to stick with him, no matter what. That is key. While I’ve been here, we haven’t really had that.”