Is it that the ‘Hoos aren’t mudders? Weather and impact on UVA Football 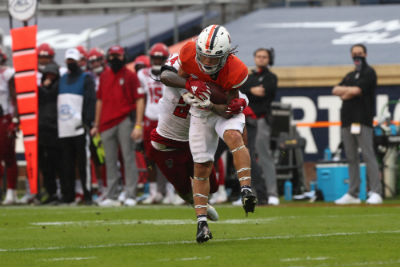 Reader Charlie Tillotson got me thinking with an observation about how UVA Football performs in bad weather.

This after our ‘Hoos slogged their way to a dispirited 38-21 home loss to an underwhelming NC State team in rainy, dreary Scott Stadium on Saturday.

His idea was for me to cross-check the weather against recent years’ results to see if there was any possibility of correlation.

The idea intrigued me because I remembered the egg that the UVA team laid on the road against a bad Indiana team back in 2018 in a game that was played in monsoon-like conditions, after which the then-new starting QB, Bryce Perkins, mentioned that he hadn’t played a game in the rain, being from the desert southwest.

Which doesn’t explain why Pro Football Focus had the 2020 QBs, Brennan Armstrong (Ohio) and Lindell Stone (Virginia), on either side of 50 in their game grades from this past weekend.

(It rains in Ohio and Virginia, is the point there.)

Anyway, Charlie wanted me to look back to 2010, which I didn’t do, because it took enough time just going back to 2017, which I decided was my first line of demarcation, since that was the first decent year for the new Bronco Mendenhall regime.

Nice way of saying, the sins of the Mike London years were manifold, and it would be disingenuous to blame them on rain and cold temps.

What I came up with: not sure that there’s the correlation that we were hoping for.

Looking back to 2017, there was that program-defining road win at Boise State on a Friday night in September played under partly cloudy skies with temperatures in the upper 40s.

The other big win from that 2017 season was an early November game in Charlottesville over Georgia Tech, the night that the team clinched bowl eligibility for the first time in what felt like a hundred years.

‘Twas a rainy late afternoon and early evening, with temps in the upper 40s.

Mudders, we were, that day.

The good guys lost their finale that year in Annapolis to Navy in the Military Bowl on a day that was in the single digits with gusty winds, but the weather wasn’t why the D couldn’t stop the option or the O line couldn’t keep Kurt Benkert upright.

Moving to 2018: we have the loss at Indiana, which almost certainly you could attribute at least in part to the weather, based on Perkins’ comments.

I’d throw in the home loss to Pitt on a Friday night when the rain seemed to give something of an advantage to a Pitt team that was adept at running the ball.

The loss down in Blacksburg on a cold day in the mid-30s wasn’t the weather; it was Tech-UVA.

Thankfully, that curse has been lifted.

In 2019, then, maybe the Louisville game on the road in late October, on a rainy afternoon, but that one felt like an odd occurrence where Louisville, which wasn’t good in general in 2019, was just the better team in the stadium that day.

So, what do we end up with here?

We can rule out Virginia not being mudders as the excuse for Saturday.