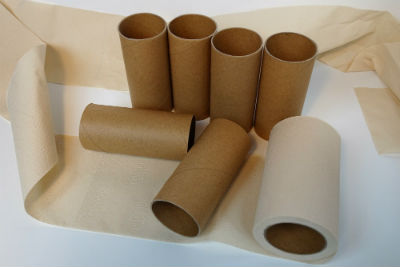 Although this bathroom staple was first created at the end of the 14th century, it wouldn’t be until the late 19th century that toilet paper was mass-produced. In 1857, Joseph Gayetty started his own line of toilet paper, selling boxes of individual sheets. A few decades later, Seth Wheeler enhanced Gayetty’s idea and started to develop rolled toilet paper with perforated sheets. Here we are 150 years later still cutting down trees, using essentially the same exact product – until now.

Bamboo is quickly becoming one of the super plants of tomorrow. It grows very fast – up to 39 inches per day – making it an excellent ecofriendly option for everything from flooring to furniture and toothbrushes to sunglasses. But today, bamboo has now moved into an entirely new market: your backside.

Did you know that 15 million trees are cut down every single year to make toilet paper? In addition, 56 billion gallons of chemicals are used to bleach it. When you think about it, that is a lot of resources flushed down the drain. Toilet paper is responsible for a whopping 15% of our world’s deforestation.

To put it into perspective for you, recent studies show that the use of toilet paper has a much greater impact on the environment than driving high-fuel-consumption vehicles. Trees play many important roles such as:

Bamboo grows back fast – bamboo is not a hardwood, it is a grass, so it grows very quickly. In fact, many do not know this, but bamboo is actually the fastest growing plant in the world! Bamboo forests grow over thirty times faster than convention trees and produces up to thirty times more oxygen, absorbing over thirty-five times more carbon. In addition, no replanting is necessary because bamboo grows back on its own.

Kind on the environment – using bamboo toilet paper can help tremendously to cut down deforestation, save wildlife and water, and can make a real impact on the efforts to reversing climate change. Bamboo is able to grow in environments with little water and depleted soil. In fact, it actually returns nutrients to the soil which can improve degraded areas and does not require fertilizer, pesticides or insecticides to grow.

Impact on local communities – a sustainable production process also effects local communities because it has an impact on their food, economy, health, and quality of life. Bamboo plantations are harvested annually so job security is never of concern in the regions that need economic security and stability. While bamboo is improving soils and fighting deforestation in Ethiopia, India, and other regions, it also provides income for the locals. Groups such as the International Bamboo and Ratton Organization believe responsibly managed bamboo fields could help achieve international goals for climate, sustainability, and health.