Inside the Numbers: Somehow adding up to a Virginia win, these 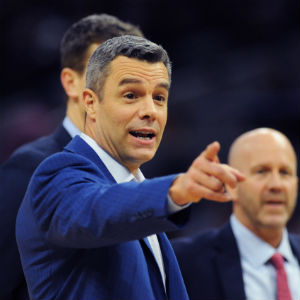 UVA would make one basket, and score five points, over the next 11:47 – the final 6:47 of regulation and the five minutes of overtime.

On its way to a win.

The ‘Hoos were 1-of-9 from the floor over that stretch, with four turnovers, the missed front end of a 1-and-1, an airballed free throw.

The guy who airballed the free throw, Braxton Key – and, let’s get this right, that one might have been among the six worst airballed free throws of all time, traveling barely 12 feet, not even grazing net – ended up making the second one.

Making it is understating things.

The second shot hit the hell out of the back rim, went straight into the air, nearly drawing rain, needing to get clearance from air traffic control, before hurtling through the net.

This, mind you, is a Notre Dame team that had come in averaging 76.2 points per game, was top 20 nationally in offensive efficiency per KenPom.com.

Which is to say, not the Virginia team that is an ACC-worst 255th nationally in offensive efficiency, down there in the weeds with the UNC Ashevilles and Robert Morrises of the world.

If you don’t have offense, you have to win with defense.

Notre Dame, which came in averaging 10 made threes per game, leading the ACC, connecting on 35.1 percent from three, fourth-best in the ACC, was 5-of-12 from deep in the first half, then made one of its last 14.

John Mooney and T.J. Gibbs, the Irish’s two leading scorers, averaging a combined 30.6 points per game coming in, scored an aggregate 17, and it took them 25 shots to get there – Mooney shooting 4-of-14, Gibbs 2-of-11.

It makes you think that the bad shooting must just be contagious, but what it really is, is a team that, yes, is beyond challenged offensively, but has been able to figure out how to compensate on the defensive end.

Reminding me of my days coaching YMCA youth basketball, and a coach who shared a pearl of wisdom with me from one of his halftime pep talks.

His team was up eight on the opposition at the break, and as he talked to his charges to get them ready for the second half, engaged them in a brainteaser.

How many points do we need to score in the second half to win?

No, he reminded them. If we play defense, we don’t need to score another point, because we’re up eight now.

Danny Ledford – that’s my youth coaching buddy; big Carolina fan, but we’ll forgive him where he was born – would be so proud.