Inside the Numbers: So, that’s what last year felt like 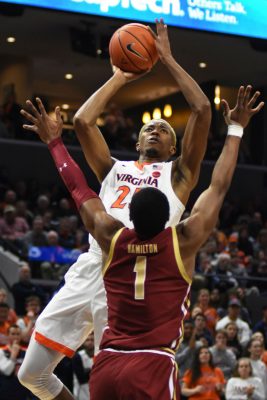 Mamadi Diakite had 10 points, one of five Virginia players in double figures, in the 78-65 win over Boston College. Photo by Dan Grogan.

Virginia’s 78-point outburst in its Wednesday night win over Boston College represented a host of season-bests.

The Cavaliers shot 56.7 percent from the field, made 10 of their 17 shots from deep, scored 1.368 points per possession.

For the first time all season, you could say that they played with … swagger?

It could be as simple as Tomas Woldetensae opening things up with his three-point shooting.

The junior was 4-of-8 from three, 5-of-10 from the field overall and had 14 points, but keep this stat in mind: he had three points after halftime.

The duo combined for 22 of Virginia’s 35 in the first half, on 8-of-14 shooting, but in the second half, they shot the ball a total of three times.

So, maybe it was more than just Woldetensae going off.

Braxton Key had 11. Kody Stattmann knocked down two from deep.

UVA got to the line – getting into the one-and-one at the 14:21 mark, and eventually getting 20 charity tosses in the second half.

And how about this otherworldly stat: shots at the rim, Virginia was 15-of-18.

The best shots in basketball are the ones at the rim and from three.

You’re going to win games when you do that and get to the line 22 times.

Woldy and Huff spacing the floor is a big factor to all of this.

Defenders have to account for shooters, and that leaves driving lanes for Clark, and the post is a bit less clogged for the bigs.

When Clark picked up his second foul at the 3:55 mark of the first half, Tony Bennett subbed him out, and didn’t go to Chase Coleman, the freshman walk-on who had been getting the minutes as the backup at the point.

Instead, Bennett moved the 6’8” Clark, his swiss-army knife, from three to one, and, naturally, the ‘Hoos seemed to turn things up a notch offensively.

Virginia made four of its last five shots from the floor, with Key hitting a driving layup, dishing to Mamadi Diakite for a dunk, and assisting Woldetensae and Huff on made threes.

Almost a point per

The offensive output improved Virginia in the KenPom.com metrics.

Now the ‘Hoos are averaging .999 points per possession.

Still just 212th nationally, but over the last four games, Virginia is averaging 1.077 points per possession.

That would rank a more respectable 67th nationally if it were a full-season number.