Inside the Numbers: Comparing Brennan Armstrong and Bryce Perkins 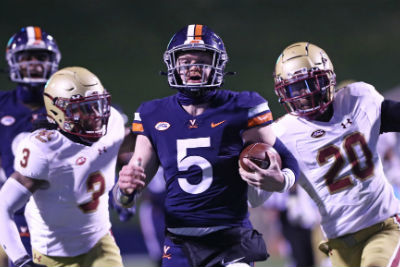 Bryce Perkins, in two years at the helm of the UVA offense, had one game where he threw for 280+ yards and ran for 130+ yards – his Scott Stadium finale, last year in the win over Virginia Tech.

Brennan Armstrong wasn’t supposed to be Bryce Perkins or anything like him.

So when he throws for 287 and runs for 130, including a 60-yard TD that propelled the 43-32 win over Boston College on Saturday, you’re not supposed to think, we’ve got this kid for two more years?

Perkins, now with the NFL’s Los Angeles Rams, had seven career 100+-yard rushing games, so Armstrong, who now has one, has a ways to go.

Armstrong through eight starts: 59.5 percent completion rate, with a 142.8 passer rating that will go up once the people who know the formula update it with today’s stats.

So, maybe Armstrong isn’t that far behind Perkins as a passer.

And, he has two more years to build from here.

Big yards, just the one TD?

Freshman wideout Lavel Davis Jr. had three catches for 66 yards, but no TDs – his apparent TD catch in the fourth quarter was overturned on replay.

Davis has five TDs on 17 receptions this season. He’s averaging an absurd 25.9 yards per catch.

His first catch against BC was also a touchdown catch, a 47-yarder in the second quarter.

Keytaon Thompson does it all. Lining up at wideout, slot, tight end, running back, he took a snap under center for a QB sneak to convert a third-and-one.

He ran for a 43-yard TD in the fourth quarter out of wildcat.

His 15-yard wildcat run set up the Armstrong-to-Henry TD pass in the second quarter. On the next snap, Armstrong faked to KT, who had been in motion ahead of the snap, and the Boston College defense overcommitted to what looked to be a double pass develolping, leaving Henry free in the secondary for the deep connection.

Thompson transferred to UVA to compete with Armstrong for the starring QB job.

With another year of eligibility remaining, he may leave in the spring of 2022 with a grad degree and a chance to be the next Taysom Hill at the next level.

Defensive player of the game

What about senior linebacker Matt Gahm? Five tackles, one sack, a pass breakup, filling in for injured classmate Charles Snowden.

Middle linebacker Nick Jackson had 11 tackles and a pass breakup. But he got beat on the 36-yard TD pass from Dennis Grosel to tight end Hunter Long in the second quarter that got BC back into the game before the break.

Let me emphasize: I’ve already cast my FWAA All-America nomination ballot, and I had Jackson on it at linebacker.