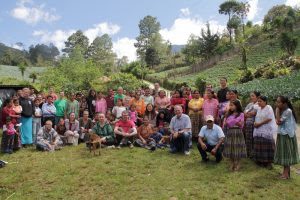 Maria Yoder’s 2017 cross-cultural semester in Guatemala and Colombia was the impetus for her return, as the same experience was for Jeanette Nisly, who has lived there for 22 years.

Planes, buses, and taxis, sure – but the connections that landed Eastern Mennonite University junior Maria Yoder in Guatemala for a spring break research project were also of a different kind.

What follows is a tangible story of EMU’s global perspective: A current student connected through a faculty member to an alumna for a meaningful research experience.

Last year, as a sophomore on a semester cross-cultural to Guatemala, Yoder jumped at an invitation from leader and nursing professor Ann Hershbergerto learn about an EMU alumna’s ongoing work there with Concern America, an international organization that in part trains villagers to become their own health-care providers.

That invitation was “the seed,” Hershberger said, for the biology and psychology double major’s biology independent research project this year.

The alumna, Jeanette Nisly, had also traveled on cross-cultural to Guatemala – two decades ago. After graduating in 1996, she returned there to stay. She is married to an architect restaurant owner, homeschools their children, teaches online nursing classes for EMU, and volunteers with Concern America. Nisly lives and works in Petén, the department of Guatemala that makes up one-third of the country’s area but less than five percent of its population. Read more about her work in this 2013 article.

As part of her graduate nursing studies through EMU, Nisly had already assessed the effectiveness, safety and affordability health promoter services in area clinics. But she wanted to take another look, this time specifically focusing on diabetes control, to establish baseline data for continued evaluation when she hopes to enter EMU’s new doctor of nursing practice program next year.

Yoder could aid in the design, collection and evaluation of that research.

In what Nisly described as “an amazing learning activity,” she and Yoder visited clinics to explore variables impacting the treatment of diabetes at clinics and evaluate patient access to care and knowledge about their disease, information that will prove useful to Nisly in her future studies.

The duo was particularly interested in diabetes, a disease on the rapid rise in Petén. One theory is that its spread is a direct result of infrastructure development outpacing of health education, Yoder said.

Improved transportation “has its goods and evils,” Yoder said. “If someone’s having a health emergency and they need to get to somewhere quickly, it’s really helpful that transport is so much easier. But then in a weird way, it’s causing this chronic disease.”

Better roads and transportation options mean increased access to the city – and increased consumption by rural residents of nontraditional foods such as sodas, chips and cookies. Knowledge about diabetes and its management is slower to arrive, leaving people vulnerable to the ill effects of processed, unhealthy foods.

“Health education is just so crucial,” Yoder said, “because if people aren’t learning about what is diabetes and how to care for it at a young age, then it just doesn’t make quite as much sense when you’re older and trying to learn about it, when you already have the disease.”

The spring break trip gave Yoder a taste of research methodology, and Nisly said that she performed “in a very sensitive manner, continuously evaluating how her work could best support our work.” It also provided Yoder a chance to observe “the challenges that affect marginalized populations in a developing country,” Nisly said – and gave her a glimpse of Concern America’s model of healthcare.

It’s “a functioning, effective health program built with community volunteers who have little formal education,” Nisly said, one that is so different from the U.S. medical model that “it is difficult to understand and appreciate without really seeing it first hand.”

For example, Yoder learned of an international study exploring the effectiveness of different ways of administering a medicine in alleviating a common insect-caused skin irritation. The study started losing patients, though, because to access the test treatment, study subjects had to travel much more than was convenient.

And besides, health promoters already had a cure that worked for most patients: a hot-water bath.

Nursing professor Ann Hershberger – the group leader who introduced Yoder and Nisly – said that the student-alumna collaboration was an impactful opportunity for Yoder.

“Maria is unique in that she is interested in a wide variety of issues,” Hershberger said. “She catches on quickly and is willing to work very hard.”

But in the bigger picture, Hershberger said, “being in Guatemala expanded her language and her understanding of the broader social, cultural and historical issues that impact a situation like diabetes, and living with a host family in the city, then several days in a rural indigenous village, along with language and context study, opened her to really understanding more than what a lab test tells her.”