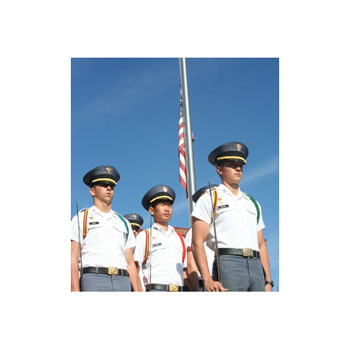 The message on the review field at Fishburne Military School on the ninth anniversary of the Sept. 11, 2001 terrorist attacks on America – thanks.

“That day, those individuals gave of themselves for their fellow man. That’s something that first responders do every day,” said Gary Critzer, the director of emergency services in Waynesboro, at a special ceremony at Fishburne honoring the city’s emergency personnel.

Three hundred forty-three first responders lost their lives in the 9/11 attacks, many at the site of the first two attacks at the World Trade Center in New York City.

“We choose public safety as a profession for many different reasons,” said police chief Doug Davis, for whom it boils down to one thing. “The common thread is our desire to help and protect the citizens of our community,” Davis said.

Fire chief Charlie Scott shared the story of a Norfolk man whose father, a Fire Department New York veteran, lost his life in the South Tower but before the collapse was able to pull out to safety a pregnant woman.

“It has been nine years since the attacks, but we must never let it became a mere tragic memory,” Scott said.

Story and photos by Chris Graham. Chris can be reached at freepress2@ntelos.net.