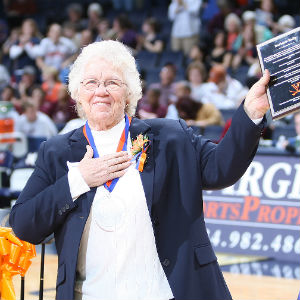 Barbara Kelly, the first full-time female member of the athletics staff at the University of Virginia, passed away this week in her hometown of Garner, N.C.

Kelly joined the staff at UVA in 1971 when she was appointed assistant director of intramurals and physical education. She spent 38 years at the University, retiring in 2009.

After developing intramural and club sports for women, Kelly was named director of women’s sports and primary senior woman administrator at UVA.

She worked to bring about the University’s first three women’s varsity intercollegiate teams (field hockey, basketball and tennis) in 1973-1974. Kelly also coached the first two women’s basketball teams to an overall record of 25-12, and later founded and hosted the first ACC women’s tournament in 1978.

Before coming to UVA, Kelly taught in the Norfolk school system for 10 years as a health and physical education teacher, intramural director and camp counselor. She served the Norfolk Recreation Department as a certified referee in basketball, volleyball and softball, and as director of weekend day camp sessions for underprivileged children and director of summer day camp programs.

While working as the director of the department’s summer day camp program, Kelly saved the life of a visiting tourist off the shores of the Chesapeake Bay.

Kelly was a four-year letter winner and a team co-captain in basketball at Garner High School, then attended Campbell University and played basketball for two seasons prior to transferring to East Carolina University.

She earned her associate of arts degree from Campbell in 1959, a bachelor’s degree in health and physical education from East Carolina in 1961 and a master’s of education degree from the College of William and Mary in 1971.

During ECU’s Centennial Celebration in October of 2007, the ECU Women’s Roundtable recognized her outstanding achievements and leadership in sports.