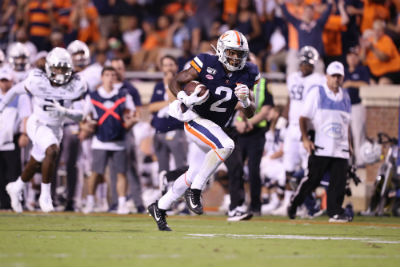 Joe Reed, headed to Los Angeles, expects to be used by the Chargers in a slash role – lining up in the slot, outside, coming out of the backfield and of course returning kicks.

The six-foot, 220-pounder has tailback size and elite wideout speed – a combination that the UVA alum “helps me become an overall better football player,” he said in an interview with the LA media after being drafted by the Chargers in the fifth round of the 2020 NFL Draft on Saturday.

“Just being a bigger guy with the ball in my hands and being able to run fast helps me a lot,” said Reed, who almost certainly factors in immediately in the kick-return unit with the Chargers.

The coaching staff out in LA has indicated to Reed that he will also be used at wideout and in the backfield, where he can use his speed and size to his advantage.

The native of Charlotte Court House, Va., population 515, as of the most recently available numbers, is excited about making the move to Los Angeles.

“I’ve been telling my friends and my girlfriend, you know, that I was trying to go to LA, I’m going to LA, so, um, I haven’t been there but, you know, I’m definitely ready for the change of scenery, and to see what it has in store for me,” said Reed, who admitted that his Saturday got more “stressful” as the final day of the 2020 draft progressed.

“I’m here with my family and my friends, and they’ve been keeping me company, you know, having a good time. Didn’t get a lot of sleep last night just thinking about it. But you know, overall, it worked out for me,” Reed said.

Reed did take one look back at his alma mater as he stepped onto the big stage. He said he is proud that his class was able to leave Virginia football “better than we found it.”

“That’s something we took pride in,” Reed said. “Coach Mendenhall taught us tons of leadership, so we took it upon ourselves not to rely on the coaches. Overall, he did a great job of turning the program around. I’m excited to see where they are going forward.”