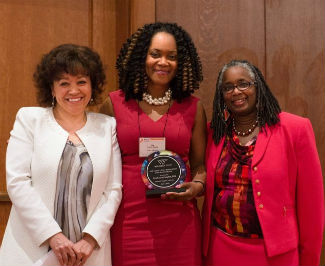 Joy Gaston-Gayles (center), associate professor in the College of Education at North Carolina State University, received the Zenobia Lawrence Hikes Woman of Color in the Academy Award for teaching/research faculty. With Gaston-Gayles is Lucinda Roy (left), Alumni Distinguished Professor of English at Virginia Tech, and Menah Pratt-Clarke, vice president for Strategic Affairs and vice provost for Inclusion and Diversity.

Virginia Tech was host last week to more than 400 talented, accomplished women who convened in Blacksburg for the sixth annual Faculty Women of Color in the Academy National Conference.

The two-day conference offers women-of-color faculty, university administrators, post-doctoral fellows, graduate students, and undergraduates a unique educational and professional opportunity to network, engage, and learn with peers from around the country. This marked the second year that the national conference took place at Virginia Tech, with attendees traveling from New York, South Dakota, Colorado, Texas, and beyond.

“I’m thrilled that Tech has been willing to host it for the past two years,” said Vice President for Strategic Affairs and Vice Provost for Inclusion and Diversity Menah Pratt-Clarke. “I think we had extremely high-quality sessions and opportunities for women of color to connect, to support, and to empower one another. In the academy, there’s often a lot of competition, but here there was a real sense of community, collaboration, cooperation, and sisterhood. That’s a profoundly important quality of this conference.”

This year’s conference was bookended by keynote presentations from Maria Hinojosa of NPR’s “Latino USA” and “In the Thick” podcast, and Brittney Cooper, assistant professor of women’s, gender and Africana studies at Rutgers University, co-founder of the Crunk Feminist Collective and author of books, including the recent “Eloquent Rage: A Black Feminist Discovers Her Superpower.”

Thursday night featured the presentation of the Zenobia Lawrence Hikes Woman of Color in the Academy Awards. The awards are named for Zenobia Hikes, who served as vice president of student affairs at Virginia Tech from 2005 until her passing in 2008. Hikes helped unite the Virginia Tech community, especially in the hours and days following the tragic events of April 16, 2007.

This year’s Zenobia Lawrence Hikes Woman of Color in the Academy Award for teaching/research faculty was won by Joy Gaston-Gayles, associate professor in the College of Education at North Carolina State University, and the award for administrative/professional faculty was won by Assata Zerai, professor and associate chancellor for diversity at the University of Illinois.

Presentation of the awards was followed by a panel of women college presidents of color, including Nancy “Rusty” Barcelo, former president of Northern New Mexico College from 2010 to 2015; Cynthia Lindquist, president of Cankdeska Cikana (Little Hoop) Community College; and Pareena G. Lawrence, president of Hollins University. The panel was facilitated by Johanna Maes, senior instructor in the Multicultural Leadership Scholars Program at the University of Colorado Boulder.

The conference also featured an array of workshops and sessions on topics ranging from how to thrive when one is the only woman or person of color in a department, to pathways for professional development.

Lenese Colson M.A.Ed. ’02, an alumna and lecturer in STEM education and professional studies at Old Dominion University, attended the conference when it moved to Blacksburg last year, and the connections she made then brought her back in 2018. Both years she attended the National Center for Faculty Development & Diversity session, which this year focused on being the only person of color within a department.

“The point is to help you learn how to survive in a place where you may be the only person of color,” Colson said. “Finding your mentoring tribe is important, and to find those things you want to work on for yourself: finding time to work, or to reframe your goals, and to make sure you are on the path you have chosen.”

Last year, the session led to Colson making a connection with another woman of color in the academy, with whom she has collaborated on research since then.

Joanna Pinto-Coelho, a visiting professor at Bryn Mawr College, was attending the conference for the first time. As an early career faculty member, Pinto-Coelho said she also appreciated the targeted sessions, especially one on nonhierarchical leadership styles that she said she’ll bring back to her own students.

Cherrel Miller Dyce, an assistant professor of education, and Sandra Reid, lecturer in human service studies, both at Elon University, were attending the conference for the second year.

“I came for community, to be in community with other scholars of color, and to contribute my voice and research in lifting up the experiences of women of color in education,” said Dyce. “Our experience is different, unique, and nuanced. This is a place where we can speak our truth.”

Hinojosa jumpstarted the gathering on Thursday with a fiery keynote about her journalism and experiences as a faculty member at DePaul University in Chicago. She spoke about the nation’s political moment and why it is so important for women of color to address their own needs to be effective for their students, many of whom look to them as role models.

“If we don’t practice self-care, we’re not going to make it, and we’re not going to be there for our students, who need us desperately,” Hinojosa said. “We are like lifelines to students, and that’s why this is important, because you need a lifeline, too. I hope I give you a little of that hope and stamina that we need.”

The panel of college presidents continued the theme.

“Coming to a gathering like this is very nurturing and very empowering for me, even as I’m in the twilight years of my career,” Barcelo said. At the same time, she provided nurturing and inspiration back to the women in attendance, relating how she became president of Northern New Mexico College despite saying “no” three previous times to being a college president.

Lawrence, still in the first year of her presidency at Hollins, said she emigrated from India largely because she wanted to avoid an arranged marriage. Because of her willingness to serve, she found herself tasked with more responsibility, culminating in a university presidency.

“You step up, you do the things you need to do, and once you do them well, you get more,” Lawrence said. “You’ve heard this: You do a good job in service, and guess what comes as your reward? More service.”

She advised those in the room to build relationships at home and coalitions at work, as well as to practice self-care to develop resilience.

“The busier you get, the harder it is to keep those relationships going, but it’s really really important,” Lawrence said. “You have to carve out that time, because at the end of the day, that’s all that matters, is relationships.”

“It’s about generosity and passion and sharing,” Lindquist said. “The theme I keep hearing is that we have to be authentic to ourselves, to use those gifts and skills to give back.”

Lindquist reflected on how authenticity to oneself plays into the job of leading an institute of higher institution.

“It does take reflection and knowing who you are as a person to be that leader, and recognizing that you are being watched by many, in many different ways,” she said.

Maes, who co-wrote the book “Journeys of Social Justice: Women of Color Presidents in the Academy” with Pratt-Clarke, facilitated the presidents’ panel as part of her second year attending the conference.

“It was a blessing on many levels because it enabled us to showcase these amazing women, putting a name and a story to a face. That is powerful,” Maes said. “It’s important for the academy to learn how different women-of-color presidents are versus the typical white president. They are the counter-story. It’s important to see how they operate, how they show up, what they’re saying, how they say it, how they communicate with people. These women are almost like the mother figures at their universities.”

The conference concluded on Friday, with Cooper addressing what she called “the academic brain trust — that’s what I see in this room.” She spoke about how she tapped into her rage — an emotion with which her students find deep connection — to find joy in the fight for social justice. That fight can be lonely, and so she spoke of the importance of building a network of peers, such as those who filled Latham Ballroom for the conference.

“Black women like myself are often the first generation to do everything in the family,” Cooper said. “The first to go to college, the first to graduate, the first to get a Ph.D. — these things I’m sure you share. There is no blueprint … I maintain that building your crew is the absolute best thing you can do for your well-being in the academy, and if you can’t build it physically, build it virtually. That’s where the Crunk Feminist Collective came from.”

Cooper called for self-care and a positive self-image as crucial elements for faculty to connect with students. “We tell our students, ‘You are good enough,’ even though we sometimes struggle to tell that truth to ourselves,” Cooper said.

That’s why the Faculty Women of Color in the Academy National Conference is so important: It places these women, many of whom may be the only women of color in their departments or among their peers and encourages them to seek mutual support and to tell each other, “You are good enough.”

“The work of social justice often involves anger, but I’m taking away from the conference the importance of eloquent rage, a righteous anger, a righteous indignation, and still having joy in the midst of it all,” said Pratt-Clarke. “I see the work of social justice and equality and equity as still a place of joy and joyful purpose, despite feelings of anger and rage.”

On Friday afternoon, as the final session wrapped up, the two Elon faculty members said they were returning home feeling joy from the collective support they found at the conference.

“It does one well to be in the presence of all these dynamic women of color,” said Reid. “There’s a certain energy here that you take with you. It fills you up.”

“We use this opportunity to re-energize,” Dyce said.