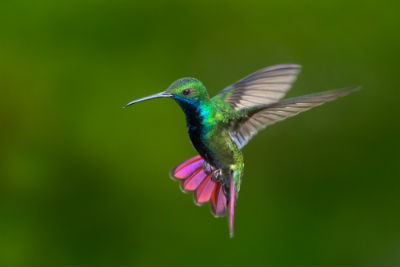 Hummingbirds are one of the many spectacular birds that are very pleasing to the eye and they belong to the Trochilidae family of birds. We all have read about them in our school books as they are considered to be the smallest birds in the world and measure a maximum of just 5 cm with a weight of just 2 gm.

There are more than 350 species of hummingbirds and they can be found in Alaska, Canada, and goes down till the Caribbean Islands.

These birds are named hummingbirds because of a characteristic hum made by their rapid wing flaps. They are also sometimes just referred to as “hummers”.

Hummingbirds are also called “Jewels” because of their bright colors and small size.

Even though we know so much about these elusive birds, there are still many mysteries that surround them and scientists and explorers are still trying to accurately solve these mysteries. Mysteries like – Their origins? How do hummingbirds eat? How is their metabolism so unique; etc.?

Today we reveal one such mystery of hummingbirds. That is, do these beautiful miniature birds sleep or not?

Contrary to the popular belief that hummingbirds never sleep, it is a known fact that Hummingbirds do actually sleep. It is just that their sleeping pattern is different from the rest of the animals and human beings. As these are migratory birds, they continuously move from one time zone to another and hence their sleeping pattern varies accordingly to adjust to the new surroundings and timetable.

Hummingbirds usually find a perching spot, where they can feel safe, and fall asleep. This can be a bush or tree, where they will perch on a branch. A mother hummingbird that has young babies who are still dependent on her will sleep on the nest to take care of her babies. Hummingbird nests aren’t always easy to find as they are hidden away in the fork of a branch, or buried deep inside a thick bush. But it is worth watching these architectural wonders which are so small in stature and are made up of moss, spider silk and lichen.

Hummingbird sleep is notable because it is actually a form of hibernation called torpor, where the body spends only about one-fifteenth of the energy it normally uses. Hummingbirds are endotherms like humans and they generate their own body heat to keep warm. By using torpor at night, some endotherms like hummingbirds allow the outside air to decide their body temperatures, and allow some of the internal processes in their body– their metabolism– to slow down. When a hummingbird goes in a torpor they fall into a deep sleep and their heartbeat reduces to around 50 beats per minute that their body temperature drops significantly.

Hummingbirds, being tiny, speedy, flying creatures, often use torpor overnight, when they don’t have access to their energy-packed sugary nectar. They do this to avoid speeding their way to death overnight in a cold harsh environment.

When they perch on a branch and go into hibernation, sometimes the hummingbird will loosen its grip slightly, which causes it to turn upside-down on the branch. They can be easily mistaken for dead birds because of their upside-down position. When found in this state if you try to touch them, they may not even respond to your touch. In this case, they should just be left alone until they return to their normal state on their own, usually when the sun comes up and warms their bodies.

Hummingbird hibernations are not as extreme as those of other animals. Because of their small size they are able to recover from any fatigue in very less time and thus they come out of torpor in an hour or less. Soon after they come out of torpor, the first thing that they want is food! They can consume as much as 25% of their daily intake during their first food flight after coming out or torpor.

Hummingbirds are complex creatures. Almost everything about them is unique and mysterious. If you have a look at the size of their brain, you will imagine how such a small brain is capable of doing all these crazy things. A hummingbird’s brain is just about the size of a grain of rice! Still, they put it to a rather good use. Other than the facts that we have highlighted above, hummingbirds are also highly philopatric — that is, they return from the south each year to the same or neighboring breeding territories in north-western or north-eastern North America. They also appear to remember where they have visited hummingbird feeders along the way. When they return back next year, they hover around the place the feeder was hung and it acts as a reminder for garden owners to fill the feeders with sucrose solution for these birds to feed on. These unique creatures also remember which flowers they have recently emptied and which flowers are still to be utilized to the maximum.

Now as you get it that hummingbirds actually do sleep even though it may be very deceptive to the eye due to the hibernation tactics that they use. Their sleep patterns vary from time to time and they tend to lose their grip and sleep upside down.

Once they come out of their sleep, they look for food to eat. Due to their fast metabolism, they need to eat more than twice their size in nectar each day. This can amount to hundreds of flowers.

What we can deduct from all this information is that hummingbirds are indeed unique in nature and an interesting creature to learn about. With more than 350 species in this world, they are a topic of study on their own!