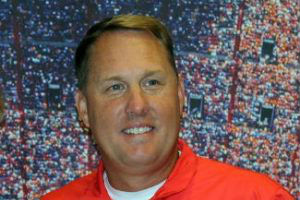 Liberty coach Hugh Freeze was one of 12 semifinalists named for the 2020 George Munger Collegiate Coach of the Year Award.

Freeze had led Liberty to a season of firsts, including the first-ever national ranking, first win over an ACC opponent and the best start in school history (8-0 to start 2020).

Under Freeze’s leadership, Liberty defeated a pair of ACC foes in Syracuse and in-state opponent Virginia Tech en route to a 9-1 regular season record. The two wins makes Liberty the first non-Power 5 team to post a pair of wins over Power 5 schools in the same season since Houston in 2015.

Liberty has been ranked in the top 25 national polls seven out of the last eight weeks and is currently ranked No. 23 in both the Associated Press and Amway Coaches Poll.

The George Munger College Coach of the Year Award, which honors to the best head coach in college football, is presented yearly by the Maxwell Football Club.

The award is named after former University of Pennsylvania coach George Munger. His devotion to ethics in athletics, and his commitment to education is the standard for which all college coaches should strive.

The George Munger Award was founded in 1989.

The list includes a field of 12 candidates for the award who have been selected by the MFC National Selection Committee.

Semifinalist voting for the Maxwell Football Club Collegiate Coach of the Year award will begin on Thursday Dec. 24 and close on Sunday, Jan. 2.

The finalist round will include the top three coaches as selected in the semifinalist round. Finalist voting will open Jan. 3 and run until Jan. 12. The winner will be announced Jan. 15.

Ed Orgeron of LSU was the 2019 winner of the award.