How horse racing has thrived during COVID-19 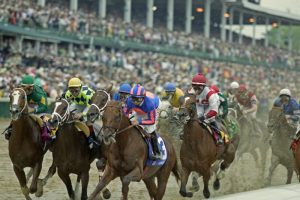 When the pandemic known as COVID-19 struck the world most sports came to a screeching halt apart from horse racing. Sports ceased to exist once the virus spread throughout the world. Still during this time, the one saving grace for niche sports fans was horse racing. There were a few racetracks that did shutter for a brief period until they managed to get a grasp on handling the restrictions and safety measures.

I recently caught up with Nick D’Agostino from Past The Wire to discuss with him his take on why horse racing flourished during these difficult times. “Basically, horse racing is different from any other sport obviously, however the main difference is horses that are in training cannot just stop. Horses need to be tended to daily, they need to be fed, walked, exercised and to have routine workouts.”

“There’s millions of dollars invested in these horses and you cannot just let them sit idle and watch your investment erode before your eyes”. Not only were horses at risk by sitting idle, the backstretch employees would not have been able to work. We started getting our racetracks back to running fairly quickly despite what was happening and to me I believe it saved the industry.” Nick is a partner in a media website that writes articles on horse racing globally and noticed a short lull in terms of reporting on horse racing news. “There wasn’t much to report on for a week or so except updating readers of which tracks were closing and who was opening or delaying opening” said D’Agostino.

The pandemic did influence horse racing in the way of Kentucky Derby prep races and how the triple crown races were scheduled other than that it could have been far worse. For the first time in history the Kentucky Derby was held without fans on September 5th which it would normally be scheduled on the first Saturday in May. The other races affected were the Preakness which will be run in October, normally run in May after the Derby and the last race of the triple crown series is held at Belmont Park known as the Belmont Stakes usually occurs in the early part of June. “The Belmont was run first this year before the Kentucky Derby” said D’Agostino and at a shorter distance than the normal mile and a half classic distance. This year it was run at nine furlongs which is also a first in its storied history.

One of the surprising factors was how even without fans the betting handle at most tracks saw an uptick in wagering. One may assume because more people were stuck at home and the fact that horse racing was the only game in town for bettors. “Horse racing has survived a lot of wars and tragedy which were not in my lifetime and for me this was a first”, said D’Agostino. The sooner we can all get back to a normal routine the better but for now it looks like horse racing will survive another historical happening the likes of which nobody would of ever predicted. Long live horse racing.