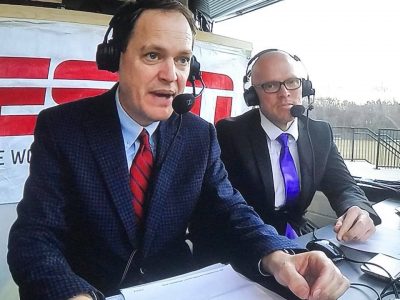 How would it be calling a college football game for three hours in a booth with a mask on? How does social distancing work in cramped quarters?

We may or may not have these issues to work around by the time the fall gets here, but if the season were to start today, my broadcasting gig would look and feel very different.

I’ve been calling games at VMI since 2015, handling play-by-play duties on radio broadcasts of Keydets’ football and ESPN3 and ESPN+ broadcasts of men’s and women’s soccer, and color commentary on baseball games in the spring.

The soccer broadcasts are the easy ones in terms of logistics. For the past two seasons, I was a one-man broadcast team, and the set-up for my broadcasts has me outside at midfield, connected to the production folks in the press box by a headset.

Football could get a little interesting if we’re still under some sort of social distancing requirements in September,

My broadcast partner, Rick Cruze, a VMI football alum, and I share what you would normally consider a spacious booth in the press box at Foster Stadium, but we’re not talking six feet of space between us or anything.

There’s no hard and fast rule that we have to be seated together, and there should be plenty of room in the press box to fit us, and also fit the TV broadcast team, and in the end, I don’t see it making that much of a difference.

But that said, it would be different.

I’m coming across discussions of what broadcasting may look like this fall in other media, and the impact at the top levels of sports could be much more pronounced.

NASCAR, which has been back since mid-May, is still having its broadcasters work remotely, and though that’s not necessarily anything new – ESPN has used remote broadcasters on a number of college basketball telecasts in recent years – it is, again, different.

I would offer that it’s not as different as you assume.

I didn’t really get this at first, but you actually do a much better job calling the game if you watch the TV monitor instead of watching the game live in front of you, because in so doing you’re describing the pictures that the viewers at home are seeing.

It helps to be on location to be able to pick up on nuances – wind, approaching weather, the atmosphere – but really, if you’re good enough to be able to talk around what you don’t know, people won’t miss on whatever it is that they’re missing out on.

I don’t assume that this would be an issue for us on our local broadcasts. We’ve already been putting on games with what the big boys would consider skeleton crews.

Especially for soccer, I’m a man on an island out there anyway.

Football, I could see, going with a TV/radio simulcast to try to cut down on the number of people in the press box, so there may be an impact there.

That’s all assuming that the public health situation doesn’t continue to lighten up, which I don’t assume, incidentally.

Every hour of every day, as I’ve been saying the past several weeks, we learn something new about the public health response to COVID-19 that makes us realize that things should be more and more open.

Two months is a long way away. A lot can and will happen in the outside world that will impact my sports broadcasting bubble.

I hope it’s all for the good.