‘Hoos, without Scott, knock off Oregon 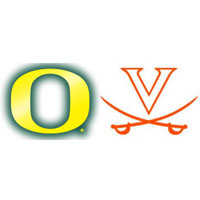 Five minutes before tipoff, members of the Virginia media staff were handing out typed press releases announcing that Mike Scott, the ‘Hoos leading scorer and rebounder, would miss Friday’s game with Oregon after having arthroscopic ankle surgery on Thursday.

The first 10 minutes of the televised game in the John Paul Jones Arena went according to the new script. Oregon jumped out to a 15-6 lead, and Virginia had seven turnovers against the Ducks’ press.

Senior Mustapha Farrakhan was unfazed. “He came in when we were a little rattled and said, We’re going to be OK, we’re going to be OK,” coach Tony Bennett said of Farrakhan, who ignited a first-half flurry that got UVa. back into the game with a transition three, and later ignited the crowd in the second half in a sequence with Virginia up 35-31, blocking a shot and hitting another three on the wing on the ensuing fast break.

Oregon would get no closer than five points the rest of the way in what turned out to be a 63-48 Virginia win.

“Coach told us to stay in the moment and be thankful of the opportunity to play. We rallied behind each other and played together,” said Farrakhan, one of three Cavs in double figures with 17 points.

Freshman KT Harrell, starting in place of Scott, scored a game-high 20 points on 8-of-12 shooting from the field, on a dizzying array of midrange jumpers off screens in Bennett’s motion offense.

“I’m relaxed and playing my game, trying to be aggressive offensively,” Harrel said.

Sammy Zeglinski scored 12 for Virginia (7-3) in his second game back from October knee surgery.

Virginia shot 50 percent from the field despite getting just one field goal in four attempts from the nominal post players in Bennett’s rotation. Bennett went with a four-guard lineup in Scott’s absence out of necessity more than anything else.

“I’d look sometimes and there’s four freshmen and a sophomore, and I thought, Just hang on, what’s going to happen here. But fortunately from a matchup standpoint, we sizewise could match up with them with four guards,” Bennett said.

Bennett didn’t give any kind of definitive timetable for Scott’s return following the surgery. The coach said the injury occurred in practice last week and flared up again this week when Scott tried to play through pain in his ankle.

“It’s all about how quickly the swelling gets out and how functional he can be. I’m hoping it’s not too long,” Bennett said.