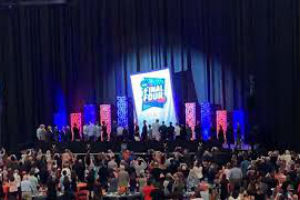 Kyle Guy was prodded by Voice of the Cavaliers Dave Koehn to tell the story of how he helped recruit De’Andre Hunter to join him as a recruit at UVA.

Hunter was on a recruiting visit with Guy and point guard Ty Jerome, both of whom had already committed to Virginia.

Hunter was on the fence, and had a visit scheduled to Miami.

Guy’s pitch: we’re going to put a banner with or without you, he told Hunter.

He admitted to Cavalier faithful at a ceremony Friday night at the John Paul Jones Arena that he wasn’t being completely honest with Hunter about not needing him.

Hunter, for his part, doesn’t recall the conversation, and neither does Jerome.

The three, all now in the NBA, reunited for the ceremony to mark the 2019 national championship that was highlighted by the raising of an oversized banner to mark the accomplishment.

It was a special night for all involved, but probably most special for the recruiting class of 2016 that made it possible.

“When our class came to Charlottesville, our big thing was, we wanted to do something special, we wanted to be remembered forever,” Jerome said before the event. “To have these interactions with fans, the parade, tonight, the football game tomorrow, it constantly reminds you of what we did, and how supportive this community is, and what we can do to connect.”

A highlight of the night was an emotional story told by coach Tony Bennett of how he broke down in tears alone in his hotel room the night of the improbable last-second win over Auburn in the national semifinals, and then how sweet it was to be practicing on the court at U.S. Bank Stadium the following day, one of the last two teams left standing.

Bennett, hired in 2009, has often been the focus of criticism for his preferred style of play, which often has his UVA teams ranking at or near the bottom in tempo, which the critics said would never allow his teams to win in March and April.

So, naturally, Virginia scored 80 points in its win over Purdue to get to the Final Four, and then 85 to defeat Texas Tech in the championship game.

“Yeah, we had our haters, but at the end of the day, a lot of people respected us, as people more than players,” Guy told a group of reporters before the event, referencing the team’s comeback story, from the inexplicable loss to UMBC in the first round in 2018, as the NCAA Tournament’s top overall seed, to the national title a year later.

“I think we resonated with a lot of people. I think we exemplify more than anything the Kevin Garnett, anything is possible, phrase,” Guy said.

Hunter exemplified anything is possible all on his own Friday night. His flight was a few minutes from landing in Charlottesville before rain and fog diverted it all the way to Richmond, and he had to scramble to get to the banner-raising ceremony in time.

The bad news for reporters was that Hunter was thus not available to talk beforehand, though for the soft-spoken Hunter, this was not bad news at all for him.

His college coach, who could do without having to talk about his innermost thoughts and feelings just fine, thank you, was just glad to have his guys back one more time.

A reporter tried to get Bennett to think ahead to next season, with practice beginning in three weeks.

Not buying it. Bennett was in the here and now, for the night.

“Tonight, my message is, enjoy this for what it’s worth, because it’s special. Maybe it’s once in a lifetime, maybe if you’re lucky, it’ll happen a few more times. That’s all I’m focused on,” Bennett said.