‘Hoos could be loaded at tight end with Poljan, Misch 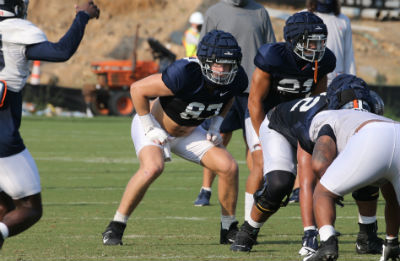 “We feel with the two tight ends we have, we can do multiple things with those guys, you know, as far as 12 personnel, and then flex those guys out and line them up as receivers, and they can run routes as well as block space as well,” UVA tight ends coach Ricky Brumfield said of his combo.

The impact will be felt in the passing game, no doubt – particularly with Poljan, who caught 33 passes for 496 yards and four touchdowns for the Chippewas in 2019, earning him second-team All-MAC honors.

And with Virginia looking to get more from its ground game, having two guys at tight end who can block on the edge is essential – whether it’s in 11 (one back, one tight end) or 12 (one back, two tight ends) personnel.

Poljan fell from the sky into Brumfield’s lap like manna from heaven. The Central Michigan grad transfer enrolled at Virginia in July, and he brings a unique skill set and a feel for the game that comes with him having played quarterback at Central Michigan for two seasons before making the switch to tight end.

“I think his greatest attribute is football knowledge. You know, from playing quarterback as Central Michigan, he kind of understands defense and what a defense will do, different blitzes and stunts and coverages, and different things like that,” Brumfield said.

Poljan’s switch from QB to tight end might remind Virginia fans of another big body that made that position switch.

Heath Miller was a hotshot prep quarterback recruit who made the move to tight end, and, ahem, things ended up working out OK for him thereafter.

“I was like, I can try to ride out college at quarterback, or I can switch to tight end and try play football longer. So, I switched. I have gained about 45 pounds in about eight months, and yeah, looking back it was a very good choice,” Poljan said.

“He played against some of the guys that we played against, and he dominated doing it,” Brumfield said. “What impressed me blocking in an open field and then blocking the defensive ends and different things like that. That was very impressive to me, seeing him do that against the likes of Wisconsin, the likes of Miami. He did it on our level, and he did it very well, too.”

Misch was recruited as a linebacker and actually started a game in 2018 at defensive end before making the switch to tight end in spring practice in 2019.

A redshirt sophomore, Misch is finally getting his feet under him in terms of his knowledge of the playbook and position.

“I would say I’m miles ahead of where I was last year at this time,” Misch said. “I was still trying to learn the offense. I was more focused on what I was doing rather than how I was doing it. And in the offseason, being able to put on some weight, you know, gain some muscle, being able to get a little faster, even with being at home, it just really helped me. I think that’s probably the biggest helpful thing that’s been added to my game, is just my size and my strength has gone up.”

Brumfield has been impressed with what he has seen from Misch in camp this summer.

“Grant Misch brings a different mindset to whole offense,” Brumfield said. “He can do a lot of great things as well. He’s not limited in what he can do, either. The things he can do well is that mindset, and that’s first and foremost, but he’ll come in and he’ll be willing to be a fullback-type guy, and a guy that can run routes as well.”