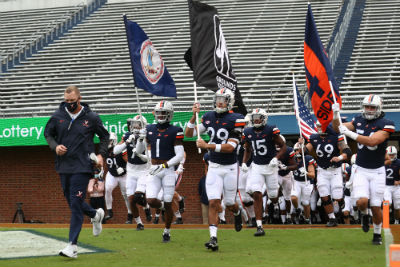 Reporters keep asking the Virginia guys how hard it is to play home games in front of practically nobody, like there’s anything any of them can do about it.

Yes, obviously, it’s something of a disadvantage.

UVA coach Bronco Mendenhall admitted Monday that he was caught off-guard a bit coming out of the tunnel for the home game against NC State earlier this month.

Was that at the root of the lackluster performance in that 38-21 loss? Maybe.

Virginia has actually fallen behind big, early, in both of its two home games this season.

Duke led 10-0 at the end of the first quarter in the season opener on Sept. 26, in a game in which the Cavaliers rallied in the fourth quarter to win, 38-20.

NC State led 24-0 just before halftime, and UVA never got back to single digits in that ugly loss on Oct. 10.

Virginia did play in front of 20,000 fans at #1 Clemson, and 10,000 at #11 Miami, and Mendenhall conceded that he did notice a difference in terms of energy in those venues.

Senior offensive lineman Chris Glaser has noticed that “it’s very quiet at times” at Scott Stadium, but he personally doesn’t think the lack of spectators is an issue in terms of the team’s overall performance.

“Everyone’s different. I don’t feel the need of a crowd,” Glaser said. “I mean, offensive line is a very, you know, kind of a behind-the-scenes-type work. So, you know, having a crowd there, having to, I know, it’s just, you know, we just have to focus on ourselves.

“I don’t feed off the crowd a lot. It’s nice. Definitely. Especially, you know, like, say back last year, you know, Virginia Tech. The big crowds, they’re fun to play with. But for me, it doesn’t, you know, I don’t depend on the crowd to play well or not,” Glaser said.

“I’ve always preached that football is football at the end of the day,” junior tailback Wayne Taulapapa said. “What excites me more is kind of, you know, my brothers on the sideline, that Fourth Side that was really important to us every time we play every time to get on the field.

“I wouldn’t say it’s much of a difference. Obviously, it’s a lot louder when there’s more people. But it’s kind of nice to be able to hear play calls, and your cadence is a lot easier,” Taulapapa said.

Sophomore Nick Jackson is also in the “not much of a difference” camp.

“Not really. I mean, I like a crowd. But I mean, to me, it kind of doesn’t make a difference,” Jackson said.