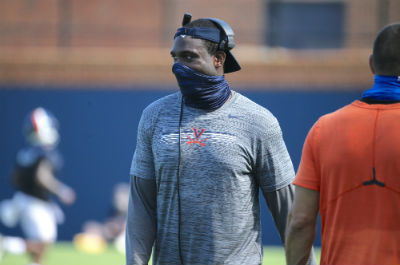 Clint Sintim is living his dream right now, back on Grounds at his alma mater, coaching the defensive line on the staff of UVA coach Bronco Mendenhall.

“The goal was always to come back here to Virginia,” said Sintim, a 2009 UVA alum, who was hired in February after serving on the staffs of former ‘Hoos assistant Danny Rocco at Richmond and Delaware for the past five seasons.

“I’m excited to be here,” Sintim said in a chat with reporters after practice on Wednesday. “I’m excited to contribute and, you know, whatever role I can play to help this team be better than what it was, that’s what I’m here to do.”

Virginia is coming off the program’s first ACC Coastal Division championship and first New Year’s Six appearance in 2019, and among the strengths of the team is the defense’s ability to put pressure on the quarterback.

The ‘Hoos were third in the ACC and ninth nationally in sacks (46), putting pressure on opposing QBs from all angles – the line, ‘backers, corners and safeties.

Sintim knows a little something about getting to the quarterback. The 2008 Phil Steele and Pro Football Weekly All-American and 2009 second-round NFL Draft pick ranks second on UVA’s all-time sack list with 29.

What Sintim was able to do on the field at UVA and the NFL helped him command the respect of his players.

“Coach Sintim wasted no time making sure that we had a foundation of trust and understanding with each other,” said Jowon Briggs, a talented 6’1”, 295-pound sophomore nose tackle. “He’s very knowledgeable about the game. Obviously, we all know about his career here and his career in the league. It’s really easy to find myself being a sponge and absorbing all the information he can have for us.”

“I respect the fact that he was a UVA graduate, played at UVA,” said Richard Burney, a 6’4”, 275-pound redshirt senior defensive end. “He has a lot of insight, a lot of knowledge about the school and just football in general. So, I respect him. He’s a good guy, a great mentor, and overall, I think a great coach.”

The transition to the new job hasn’t been smooth – you might have heard, but there’s a pandemic going on.

UVA didn’t get a single spring practice session in before the public health response to COVID-19 shut sports down in March.

That has meant, for Sintim, getting to know his players and fellow assistants over Zoom teleconferences, same as you’ve had to use Zoom to keep up with your co-workers and clients.

“The leadership on this team, on this defense, you know, some of the older guys, they welcomed me and gave me an opportunity to learn and really just follow suit as far as the expectations,” Sintim said. “That made the transition easier, because there’s a bunch of guys who’ve played it and done some good things. We’re just continuing to build now that we’re on the field.”