Holiday greenery can spread boxwood blight to your landscape, according to Virginia Cooperative Extension experts 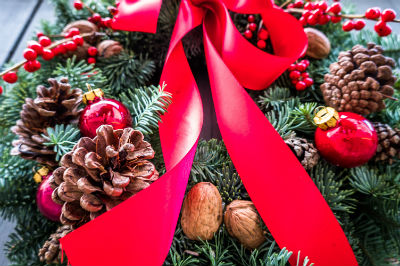 Boxwood blight, a fungal disease affecting plants in the boxwood family, can be spread by discarded holiday greenery.

“Having a wreath hanging on your door is not necessarily a problem because those fungal spores are not going to jump off the wreath into the landscape, and this fungus doesn’t get around very easily,” said Mary Ann Hansen, Virginia Cooperative Extension plant pathologist. “It is mainly going to spread if you have discarded infected plant material lying right next to susceptible boxwood.”

Boxwood cuttings are popular in holiday greenery such as wreaths. In recent years, there have been documented cases of holiday greenery infected with boxwood blight, which if placed in the compost pile or left in the landscape, can spread the disease to nearby boxwoods.

According to Hansen, decorations using the broad-leaf evergreen often come from western North Carolina and southwest Virginia, where the first cases of boxwood blight were seen in 2011.

Symptoms of boxwood blight include:

To dispose of any holiday greenery, Hansen recommends double-bagging the decoration and sending it to the landfill. Beyond that, there are several ways to prevent the spread of the disease from holiday greenery:

In Virginia, the disease is often found on English and American boxwood, both of which are highly susceptible. A list of some of the available cultivars that have resistance, as well as some of the most susceptible cultivars, can be found here.

If you are concerned about your plants having boxwood blight, follow the Virginia Tech Plant Disease Clinic digital diagnostic guidelines.

For ways to prevent spread of the disease in the landscape, visit the Virginia Cooperative Extension Boxwood Blight Task Force website.