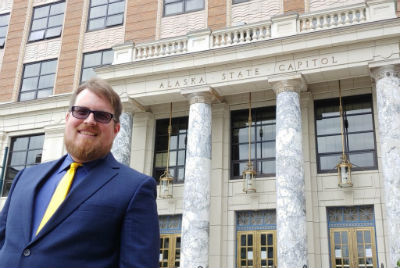 James Brooks still remembers the January day that he boarded a plane from Florida to Alaska to take a job as a copyeditor at the Fairbanks Daily News-Miner.

It was 60 degrees and sunny when he left Florida that day. When he arrived in Fairbanks at midnight, it was a freezing 40 degrees below zero.

“I didn’t know what to expect,” said Brooks, a 2006 Virginia Tech graduate.

But he didn’t let the chilly weather stop him from soaking up all that Alaska would offer — including winning a Pulitzer Prize 12 years later.

Brooks was a member of a team of reporters and editors at the Anchorage Daily News that received the Pulitzer Prize for Public Service in May for a yearlong series called “Lawless,” a partnership with ProPublica, a nonprofit newsroom that produces investigative journalism. The series featured an eye-opening investigation into the criminal justice system’s failures in communities across Alaska. The work exposed extremely high rates of sexual assault and domestic violence and uncovered some rural communities with no local law enforcement.

Other stories in the series revealed that some Alaska communities hired police officers who had been convicted of felonies, assault, and other criminal offenses. Additional reporting uncovered the failures of the state’s 40-year-old Village Public Safety Officer program.

Kyle Hopkins was lead reporter for the series, and Brooks, who covers the state government from Juneau, Alaska’s capital, contributed with the government angle. Brooks fielded questions to lawmakers and reported on state policing and public safety decisions. The entire newsroom at the Anchorage Daily News, which includes at least 40 journalists, was involved in the project in some way.

As a result of the investigation, Alaska has allocated more money for rural policing. Also, last spring, U.S. Attorney General William Barr declared an emergency for public safety in Alaska and pledged $52 million to help law enforcement in the state by adding officers, new federal prosecutors, and expanding other services.

Brooks said it has been a life highlight for him to have a supporting role in the “Lawless” team, which earned the newspaper’s third Pulitzer Prize.

“You always think of a Pulitzer Prize as being out of reach and out of touch,” he said. “This shows me that it’s not. If I can get involved with a project like this, then it’s within me to do it myself.”

While growing up, Brooks lived in different places in the Midwest and on the East Coast, but he said he always wanted to visit Alaska. Landing the job in Fairbanks more than a year after graduating from Virginia Tech was the “perfect opportunity to get up there,” he said.

“One of the things I love is getting around to see new things in Alaska and traveling to all corners of the state,” Brooks said. “It’s practically a nation unto itself.”

At Virginia Tech, Brooks double majored in history and English. He also was a copyeditor for the Collegiate Times and served as that newspaper’s editor-in-chief one summer.

“What always struck me about working with James was how deeply invested he was not just in the mechanics of putting out the paper, but also in the big-picture issues that affected the journalism profession,” said Kelly Furnas, former editorial advisor for the Collegiate Times. “He was always interested in the ‘why’ as much as the ‘how.’ I remember long conversations in my office about complex ethical issues that challenged not only him as a student, but me as an advisor.”

Brooks, who also worked in Virginia Tech’s sports information department, said he decided to pursue a journalism career because he loved telling stories.

“I love being able to learn more about a topic and being able to explain it to folks and tell them something about the world they didn’t realize,” he said.

The “Lawless” series continues this year, now with a focus on further investigation of Alaska’s high rates of sexual assault. Brooks plans to continue contributing to the coverage.

“It is not out of reach to do work that’s special like this,” he said of the team’s Pulitzer Prize.

“The award is a recognition that you are already doing something special and something great.”