Hokie hooked on storms: Sharing his passion, and building a following 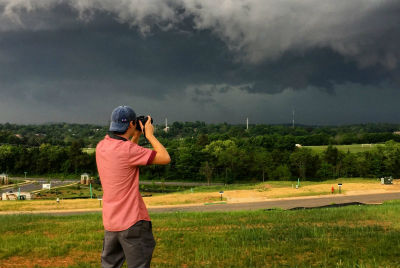 Dark clouds gather across a dusk sky. The wind picks up and the temperature drops perceptibly. Thunder rolls in the distance, and then a first bolt of lightning illuminates a nearby mountaintop. For most people, these are signs to take cover. For Peter Forister, it’s time to grab the camera and get on Twitter.

“I grew up in Colorado Springs, with Pike’s Peak out one window and the Great Plains out the other, and I’d watch the storms come down from the Rockies,” explained Forister, a graduate student in the College of Natural Resources and Environment. “Ever since I was a kid, I loved the thunderstorms and hail, and as I grew up that matured into wanting to understand weather systems as a whole.”

After relocating to Winchester, Virginia, Forister spent hours as a high school student watching YouTube videos to learn all he could about weather and the science of storms. That background led him to Virginia Tech.

“I knew when I was 5 years old that I wanted to pursue a career in meteorology,” Forister said. “As Virginia Tech is the only school in the state with a meteorology degree program, it was always my first choice.”

Forister found his niche in the Department of Geography, where he majored in geography and minored in meteorology — a combination that offered the opportunity to learn about utilizing geographic information systems (GIS) technology to provide a perspective for meteorological science.

Along the way, Forister realized that social media was a way to connect with other meteorologists and weather watchers. In 2015 he began building a social media presence that has now garnered him national attention: he has had several mentions in the Washington Post and local weather broadcasts and has a following of passionate storm chasers as well as those who just like to watch from the safety of their smartphones or computers.

“Social media is very much a communications tool,” he explained. “By connecting knowledge together, everyone gets smarter. So whether I’m sharing a forecast or a tidbit of research, I’m helping to build everyone’s knowledge. And we’re helping to build a community of meteorologists and researchers and interested individuals right here in Southwest Virginia.”

Forister also uses social media to showcase his skills as a photographer, an interest that grew out his time spent chasing storms, including two trips with the Hokie Storm Chasers. On days when he can’t locate a supercell storm, he’ll find other phenomena to photograph. He ventured out several times to take photos of the comet NEOWISE, which was visible in the nighttime sky in mid-July of this year.

“I try to use a scientific approach to what I post on social media, but also an artistic one,” he explained. “Where I really get enjoyment is having the chance to share my art and see it improve over time. It’s just another way to share my passion about this field.”

Currently a master’s student after completing his undergraduate degree in 2019, Forister is using GIS technology to create maps to show the scars in forest vegetation that tornadoes leave behind to better understand the impacts that tornadoes have on the landscape.

“The government has poured millions of dollars into advanced weather programs, which are incredibly useful in the remote sensing of active weather patterns,” he explained. “What I am aiming to do is narrow that data down to look at tornadoes specifically and understand how we can use the collected images to advance our understanding of how tornadoes impact terrain.”

Professor Lynn Resler, Forister’s advisor, noted that this application of geospatial information is unique in the field.

“Peter’s thesis project is a natural combination of his passion for severe storms and his strengths in geospatial technology,” Resler said. “The approach he is developing to examine tornado damage in forested areas is unique because he is considering the effect of terrain on damage patterns to develop damage indices for complex topographies.

An April Washington Post article on a devastating storm that hit in Mississippi showed maps Forister generated of tornado damage and outlined his research. By comparing before-and-after images from NASA satellites, he determined that one of the tornadoes from the storm system had a maximum damage width of 2 miles, achieving the rare classification as an “enormous” tornado.

Forister plans to finish his master’s this year and intends to merge his passion for weather with his background in GIS technology.

“My goal is to be a meteorologist, with some aspect of geospatial or remote sensing spatial sciences integrated into it. There are a lot of new industries and places where those skills sets can merge, and I’m excited to see where I go next.”