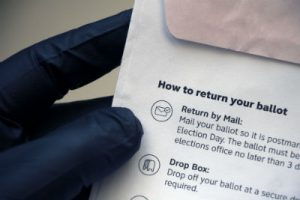 Attorney General Mark R. Herring has sent a letter demanding “additional information on any recent operational or infrastructure changes that could affect mail service in Virginia, and details on plans to reverse any such adverse changes.”

Earlier this week, Herring sued the Trump administration seeking to block further changes at the U.S. Postal Service and reverse previously implemented changes that could disrupt postal service in Virginia, particularly the proper and timely handling of absentee ballots in the upcoming election.

Postmaster General Louis DeJoy announced that same day that he was suspending any further changes until at least after this fall’s election.

“The Trump administration has a pattern of saying one thing publicly and doing the complete opposite behind closed doors and I fear this could be the case with their statement concerning the changes at USPS,” said Herring. “I want to hear from the USPS directly about any changes and reductions they have already made or are planning to make, despite the announcement from the Postmaster General that all changes will cease until at least after the election. I also want to know how they plan to reverse any damage that has already been done because of these hasty, illegal changes.

“President Trump’s changes to undermine the USPS are nothing more than an attack on our democracy and an attempt to suppress votes. We are three months away from an election that will determine the future of our democracy and I want Virginians to feel confident in the fact that their vote will count, no matter if it is cast at the polls or through the mail.”

As Herring says in the letter, “Despite Postmaster General DeJoy’s statement, I have reason to believe that further changes may be underway, and that the extent of previously enacted operational and equipment changes in Virginia are more significant and severe than previously known.”

Reports of changes and reductions to two critical USPS processing facilities in Northern Virginia that “handle hundreds or thousands of pieces of mail each day” prompted Herring to send today’s letter.