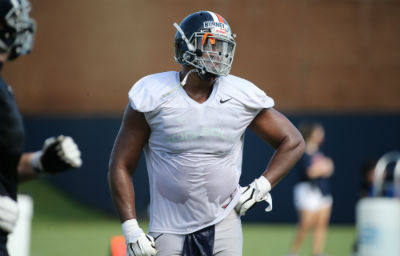 Defensive end Richard Burney’s sixth season of eligibility at Virginia has come to a premature end. The school announced Tuesday that the Chesapeake native will miss the remainder of the season due to a medical issue.

The release announcing the news did not go into specifics, and UVA coach Bronco Mendenhall also declined to address specifics with Burney’s situation, calling it a “health injury.”

Burney had missed most of the 2018 season while dealing with potentially life-threatening blood clots.

He was able to get back on the field in 2019, playing in all 14 ‘Hoos games, and was granted a sixth year of eligibility ahead of the COVID-19 outbreak in the spring.

Burney was not made available to the media on Tuesday. He did talk with reporters back in August during training camp about his decision to return for the 2020 season.

“My family’s always gonna be concerned, you know, with me playing football in general. But you know, at the end of the day, they trusted me with my decision. They just want the best for me, and they put that decision on me,” Burney said at that time.

After getting word from medical and training staff that he would not be at risk, Burney was back on field for the 2020 season, starting the first five games of the season before missing last Saturday’s contest against North Carolina.

Burney’s 2020 season concludes with him registering 16 tackles and a pair of sacks.

Twice he was named to the strength and conditioning staff’s “Dirty Dozen” for his outstanding off-season efforts in the weight room.

Mendenhall said Tuesday that the team was “saddened” by the news that Burney’s season is done.

“He was elected to be the player that chose his jersey first, team captain, got an extra year of eligibility granted, has overcome so much adversity, and an injury sustained, or health-related injury, really, after the Miami game is what led to this. So, again he won’t be with the team in an active way through the remainder of this season. He will be back with us, and hopefully on the sideline or just around, as soon as possible,” Mendenhall said.

In 2019, Burney was named a CoSIDA District 3 Academic All-American. He is currently pursuing a master’s degree in the University’s Curry School of Education. He previously earned his undergraduate degree in American studies and is the athletic department’s 2020-21 Ed Armstrong Endowed Football Scholarship recipient.

He started his career at UVA in 2015 as a tight end and switched to defensive end for the Cavaliers’ appearance in the Military Bowl in 2017. He was a consistent contributor on special teams, even serving as a long snapper early in his career.

Burney played in 46 games during his career and made a total of 47 tackles, including nine tackles for loss and three sacks.

Mendenhall was asked Tuesday if the topic of trying to get one additional year of eligibility for Burney had been broached yet, and said it hadn’t.

“I’ve avoided it intentionally, but I’m not saying that players and coaches haven’t thought about it,” Mendenhall said. “I just haven’t felt it’s the right time yet. I’ve wrestled with when and how to do that. No, we haven’t talked about it, not only with not with Richard, but with anybody.”