Having election fatique? JMU expert offers tips for how to cope 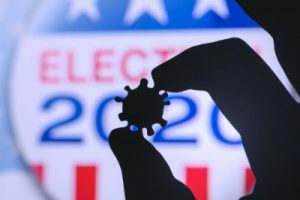 The upcoming presidential election is on TV 24 hours a day, seven days a week, all over social media, the interwebs, front yards in your neighborhood.

Is it too much?

“Voter fatigue is a real problem in the U.S., and becoming a concern in other liberal democracies,” said Ben Blankenship, an assistant professor of psychology at James Madison University.

Speaking on a podcast produced by the James Madison Center for Civic Engagement, Blankenship discussed what triggers people’s emotions and ways campaigns and the media use those triggers to spur actions.

Political campaigns use attack ads, Blankenship said, to create anger, an effective strategy for energizing their supporters to vote and take part in elections while also deflating supporters of the opponent and causing them not to vote.

The news media play on emotions, too.

“Media operations make more money through things like advertising, so they’re incentivized to make people want to have emotional reactions and then stay engaged for their programming,” Blankenship said. “It’s important for us as consumers of media to evaluate the framing that the media we are consuming is providing.”

For people feeling stressed and burned out by the election, Blankenship suggested taking a break from social media and, when going on social media, take a moment to think about the purpose for using it.

If logging in to connect with family and friends, don’t deviate from that.

Other ways to cope, he said, include taking time to reflect on emotions. Mediation and yoga can be beneficial ways to reflect, he said. Actions that provide a sense of control, such as finding volunteer opportunities to help a candidate, can be helpful as well.

And don’t forget that people with opposing views are human too and may not share the exact same views as the candidate they support.

“It’s important for us to recognize that emotions are protective because they help us learn things about our environment and make judgements about things in our environment,” Blankenship said. “It’s what we do as a result of those that can be problematic.”