Hasise Dubois: He has to be an NFL player, doesn’t he? 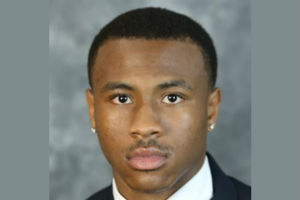 It’s hard to imagine that Hasise Dubois isn’t playing on Sundays next fall.

Dubois was one of four FBS receivers with 100+ target, 70 percent catch rate and 10+ yards per target, and was tops nationally in most catchable passes without a drop (75).

Dude is an NFL guy.

Those of us who watched him play for four years know this. NFL scouts and execs still have yet to be dragged into the perimeter of wisdom on Dubois, though.

“No one knows what’s going to happen,” Dubois said. “So, I’m just trying to make everything out of it, like work out as much as possible, like just stay active and not just sit down and lose my shape or whatever, and just fall down in the draft board.”

Dubois, somehow, didn’t get an NFL Combine invite, which, did you see those stats?

We’re talking a guy with 20 catches on 24 targets in December games against Top 10 teams with lots of NFL prospects in their secondaries.

The knock on Dubois is speed. He has been training with his brother, Ishmael Robbins, a pro track athlete, and said he was aiming to be able to run a 4.5 at the UVA Pro Day that had been scheduled for April 8.

Of course, that got scuttled due to COVID-19.

“Honestly, the feedback I’ve been hearing from the scouts is, before the coronavirus, they were just very, like, intrigued, and, like, excited to see me running my 40-yard dash. And now, I was speaking to a couple of them, and they were just saying, Oh, it’s very unfortunate that it didn’t happen,” Dubois said.

“But they’re glad that I had the senior season that I had. And they said, just keep doing that. And just, they believe my senior season will definitely give me picked in the draft.”

At the absolute least, Dubois gets a chance to make a team as an undrafted free agent.

He’s ready to pitch in wherever he’d been needed to get a job in the fall.

“I could add a lot of things. I can add consistency, I can add depth, I can add on special teams side,” Dubois said. “I played plenty of special teams here at UVA. I played onside kick, kickoff return, punt return. So, I feel as though I’m very versatile, just not focused on offensive side of the ball.

“I feel as though, like, later in the year, I basically summed up my speed questions a lot, because, I mean, there’s a couple plays at the end of the year where I was able to run away from players or show my burst so I can move up at least a little bit in their eyes. So, I feel as though, like, regardless if I run my 40-yard dash or not, I feel I should have a pretty good chance of landing somewhere.”