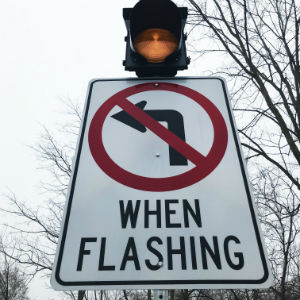 More than 200 citations have been issued to drivers who have failed to abide by new safety restrictions at the intersection of Port Republic Road and Hunters Road in Harrisonburg.

Now, city officials are again asking for drivers to be mindful to ensure their safety.

The restriction, which does not allow drivers to make a left turn onto, or off of, Port Republic Road at Hunters Road during peak traffic hours, has been in place since August 2019. Similar restrictions were put in place at the Port Republic Road intersections with Crawford Avenue and Hillcrest Drive following a corridor study that identified safety and congestion issues for the area. Flashing signs are in place warning of the restrictions, and officers patrolling the corridor allowed for a warning period for offenders to help educate them prior to issuing citations.

The study, which analyzed data from January 2013 to June 2019, identified 41 crashes at the Hunters Road intersection during that time. Six of those crashes resulted in injuries for those involved.

“It’s very important that drivers in this area take the restrictions seriously to avoid crashes and the potential for serious injury,” Harrisonburg Director of Public Works Tom Hartman said. “Not only do these restrictions help protect drivers, but they also help reduce congestion in this important corridor. We are pleased to see that drivers have worked to abide by the changes at Crawford and Hillcrest, but it is imperative that they follow all safety restrictions on Port Republic Road as we work to improve this corridor.”

Left turns are one of the most dangerous turning movements and are responsible for a high percentage of crashes with injuries. Left turns off of Port Republic Road onto neighborhood streets also have a tendency to cause rear-end crashes when the vehicle turning left has to wait for a gap in traffic and comes to a stop in the through-lane, causing the drivers behind the turning vehicle to have to rapidly or unexpectedly come to a stop.

Restricted hours are in effect Monday through Friday during peak morning and afternoon commute times. Signs will be flashing during this time.