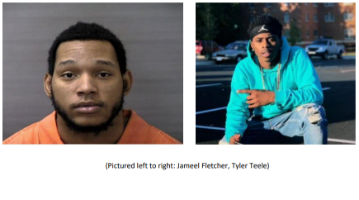 Harrisonburg Police have obtained warrants for two men wanted in connection with a robbery reported on Monday.

Jameel K. Fletcher, 23, of Harrisonburg and Tyler Teele, 24, of Rockingham County, are wanted on several charges related to the incident, which took place in the 1100 block of Meridian Circle.

According to a report from the HPD, several people in the area called emergency services after hearing a gunshot during an altercation in the parking lot in this area. Officers responded to the scene, but were unable to immediately locate anyone involved in the disturbance.

HPD’s Major Crimes Unit was contacted to respond after blood was located on the ground and on nearby vehicles in the area. Shortly after the initial response, two victims were located nearby. Neither person had been shot, but one victim sustained minor injuries from an assault during the incident, contributing to the blood found at the scene.

The incident is believed to be isolated in nature, as the victims and suspects were known to each other.

HPD is asking that anyone who may have witnessed this incident or has information regarding the whereabouts of Fletcher or Teele to contact HPD’s Major Crimes Unit at (540) 437-2650.