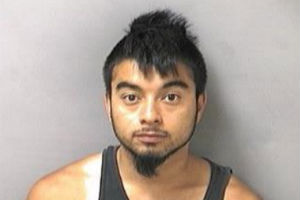 The Harrisonburg Police Department is seeking information regarding the location of a suspect wanted in connection with several recent commercial burglaries.

On April 6, officers with HPD responded to the Circle K Exxon station located at 1001 East Market Street after employees arriving for work that morning observed signs of a burglary. HPD’s Major Crimes Unit was notified and began an investigation.

On April 7, officers responded to a reported burglary at CiCi’s Pizza on East Market Street. The method in which the suspect used to gain access to the restaurant, led investigators to believe this burglary and the Circle K burglary were committed by the same suspect.

On April 8, officers responded to the Family Convenience Store on Reservoir Street for an additional burglary where lottery tickets were stolen and later cashed that same day at other locations in the city.

On April 9, warrants were obtained for Elmer Rodriguez Mundo, 30, of Harrisonburg in connection to each of these incidents. These charges include two misdemeanor counts of property damage, four felony counts of grand larceny, two felony counts of obtaining money by false pretenses and three counts of breaking and entering.

In addition to these incidents, HPD is also currently investigating several other commercial burglaries in the north section of the city. HPD is cautioning similar businesses in the area to take extra precautions as necessary to protect their property.

Anyone with information regarding the whereabouts of Mundo or the other burglaries are encouraged to contact HPD’s Major Crimes Unit at 540-437-2640. Those who wish to remain anonymous can contact Crime Solvers by calling (540) 574-5050 or by texting “HPD” plus their tip to CRIMES (274637).