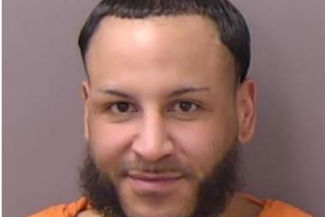 The Harrisonburg Police Department has arrested Christopher Dalton May, a suspect involved with a residential breaking and entering involving a gun in November on South Main Street.

On Nov. 12, officers responded to an address on South Main Street just off Court Square to investigate a breaking and entering possibly involving a firearm.

May, 32, of Harrisonburg, is charged with a probation violation, assault, burglary, brandishing, and possessing a firearm by a convicted felon.

May had been on the loose until Tuesday, when the Combined Harrisonburg and Rockingham Gang Enforcement Unit, patrol units, U.S. Marshals Service and HPD SWAT team performed a traffic stop on a vehicle occupied by May and took him into custody.

There were no injuries, and this was an isolated incident.

HPD asks anyone who may have witnessed this crime or who may have other related information to contact HPD’s Major Crimes Unit by calling (540) 437-2640.