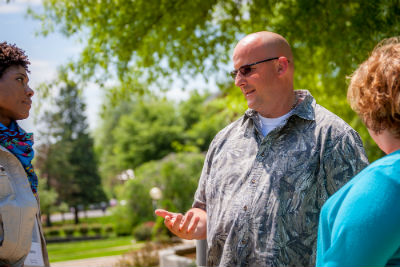 The Southern Police Institute in Louisville, Kentucky, and the Summer Peacebuilding Institute (SPI) at Eastern Mennonite University (EMU) no longer share just an acronym. They now have a common alumnus in Lt. Kurt Boshart of the Harrisonburg Police Department, who just completed a restorative justice course at SPI and who traces his interest in the subject back to the three months he spent in Louisville in 2013.

There, Boshart took a course for administrative police officers that critiqued various methods and ideas in law enforcement today. He returned home convinced that it was “high time that we look at models outside of traditional policing.”

One of the alternative models that Boshart had heard of before but didn’t then know much about was restorative justice. In the context of law enforcement, it’s an alternative to the traditional judicial system that focuses on the relationships that are damaged by crime, and holds offenders accountable for meeting victims’ needs that arise from the incident.

As it turned out, Boshart’s return from the police institute coincided with an effort within the Harrisonburg Police Department and wider community to launch a new restorative justice program. He soon found himself leading development of the program from within his department, working with partners from EMU, James Madison University and the Fairfield Center, a local nonprofit that offers restorative justice services.

The program, which will divert appropriate cases from the courts to a restorative justice process, was publicly announced in March 2015 after more than a year of planning. Along the way, Boshart has become convinced that restorative justice offers law enforcement a valuable option for resolving conflict and increasing public safety.

Pointing to the growing body of empirical evidence that restorative justice is better than the court system at reducing recidivism rates for some crimes, Boshart said that police would do a “disservice to the community” by not taking the topic seriously. Amidst the ongoing national debate over police-community relations, justice and incarceration, Boshart also sees the new restorative justice program as a way of strengthening ties between police and the public, in addition to an effective new way of resolving specific conflicts.

One of Boshart’s biggest priorities for the new program is that it not meet the same “come and go” fate that he’s seen befall other initiatives over the years. During his SPI course, Boshart completed a group project on program sustainability, through which he gained new insight into how he might ensure the local program stays around for the long haul.

Another valuable aspect of the SPI experience, Boshart said, was the diversity among his classmates. The 12 people in the course came from all across the United States as well as Peru and Ethiopia – all with their own thoughts and experience on how restorative justice practices can benefit communities. Boshart found their perspectives expanding, stimulating and relevant to his own work in Harrisonburg.

“I can walk away with a better understanding of what the potential for our restorative justice program is here locally,” he said.