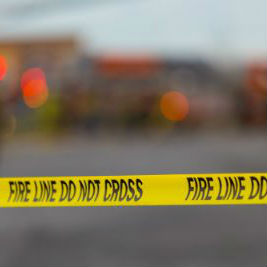 Units from HFD arrived shortly after 12:30 a.m. to find fire through the roof of an attached garage of the residence. The occupants, who were all awake at the time, were alerted to the fire by an odor of smoke in the residence and evacuated prior to HFD arrival.

Crews brought the fire under control in approximately 20 minutes. HFD was assisted by units from Rockingham County Fire and Rescue, Harrisonburg Rescue Squad and the Harrisonburg Police Department.

There were no civilian injuries, and one minor firefighter injury.

“Even though the occupants were not alerted by smoke alarms, due to their being awake at the time of the fire, this fire stresses the importance of having working smoke alarms in your residence,” Interim Fire Chief Stephen Morris said. “In this situation, the occupants noticed the fire prior to the smoke alarms activating.”

The cause of the fire remains under investigation but appears it started on the exterior of the residence and burned up into the
attic space.