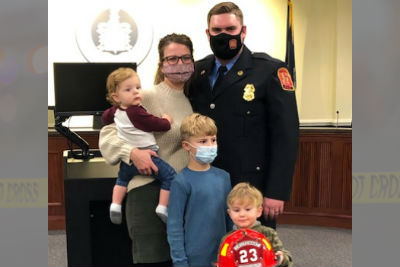 Luke Walker, an eight-year veteran of the Harrisonburg Fire Department, has been promoted to the rank of fire lieutenant.

Walker will be assigned to Engine 23 at the City’s Rock Street Fire Station #4, the same station his father, John D. Walker, served for 23 years.

Personnel must have completed four years of continuous service at the rank of Firefighter II (or higher), hold certain professional certifications and a minimum of 15 college credits in order to be eligible to test for lieutenant.

A fire lieutenant is an officer typically assigned to supervise a crew of three to five personnel on a shift where they are assigned to a fire engine or ladder truck.

Walker is a nationally registered paramedic, holds an associate of applied science degree, and is certified as a fire investigator and fire inspector. He also is a member of the Regional Hazardous Materials Team.

“I am extremely pleased to be able to promote Luke to the rank of fire lieutenant,” Fire Chief Matthew Tobia said. “In many ways, the promotion to lieutenant is the most significant promotion he will ever take. For the first time, he will be responsible not only for his own life, but the lives of his crew.”

Walker was sworn in by Rockingham County Clerk of Court Chaz W. Haywood in a brief, private ceremony attended by his immediate family.

Walker also has an older brother in the HFD, Joseph, who is assigned to Tower 1 on C Shift at Fire Station #1 in the city.