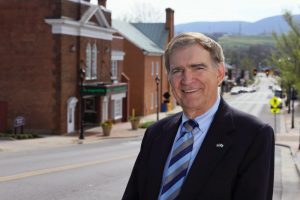 State Sen. Emmett Hanger said today the approval of Amendment 1 by voters on Tuesday will help end gerrymandering in our Commonwealth and is a victory for the people of Virginia.

Hanger, who last month launched an exploratory campaign for governor, helped form a statewide organization, Virginians for a Better Tomorrow, that helped with the effort to get voters to say “Yes” to Amendment 1.

VABT raised funds statewide to contact more than one million Virginians in the victorious campaign to put an end to decades of partisan gerrymandering in the Commonwealth.

“Working together we have ended one party control of redistricting and the efforts to draw district lines in a partisan way,” Hanger said.  “This vote is a major victory for Virginians.”

Almost 66 percent of voters cast ballots voicing their approval of Amendment 1, a proposal to create a bipartisan 16-member Virginia Redistricting Commission. The commission will consist of eight state lawmakers — four from each party — and eight citizen members chosen by a group of retired circuit court judges.

“For many decades partisan politicians in our state have used gerrymandering to draw legislative and congressional district lines with little regard for the impact gerrymandering has on our citizens” Hanger said. “Now, thanks to the voters of Virginia we can move forward to a new era of fairness for our citizens.”

Hanger gave credit for the successful outcome to a grassroots effort initiated by bipartisan groups One Virginia 2021 and FairMapsVa, led by executive director Brian Cannon.