Hamilton tops Bennett for ACC Coach of the Year 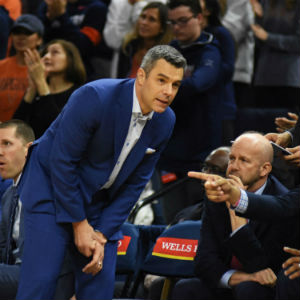 Tony Bennett isn’t the ACC Coach of the Year, and the bigger shock: the vote wasn’t even close.

Florida State coach Leonard Hamilton won the honor, receiving 62 votes from the 75-person selection panel consisting of the league’s 15 head coaches and 60 members of the media.

Note: They don’t let people like me vote in these kinds of things.

Meaning: I’m at best the 61st-best sportswriter covering the ACC.

Back to the lede: I guess a big factor in the vote for Hamilton is that he led his team to the ACC regular-season championship after the ‘Noles were picked to finish fifth in the preseason.

Bennett led his team to a second-place finish after his ‘Hoos were picked fourth.

Another big factor for Hamilton: he lost five guys from his rotation from last year, a group that produced 60.1 percent of the team’s scoring in 2018-2019.

Um, Bennett lost four guys that produced 69.0 percent of his team’s scoring from a year ago.

At best, this one is a toss-up.

Biased view here, because I watch the Cavaliers every night, but Bennett had more work to do to get 15-5 in the ACC out of his group than Hamilton had to do to go 16-4.

I thought Duke’s Tre Jones as ACC Player of the Year was easy. Jones, a sophomore, is averaging 16.2 points and 8.4 assists per game, and he has been his team’s best player on the floor in the biggest moments.

Teammate Vernon Carey put up the bigger numbers (17.8 points, 8.8 rebounds, 57.7 percent shooting), but he can be taken out of games a bit too easily.

Still, Carey is the best freshman, head and shoulders so.

A case could definitely be made for Virginia’s Mamadi Diakite (13.7 ppg, 6.8 rebs/g), who does a little bit of everything, leading his team in scoring, anchoring the nation’s best scoring defense, but the voters who don’t know enough to vote for Tony Bennett for coach of the year aren’t going to be impressed by Diakite’s numbers.

At least those same dolts had enough sense to put UVA point guard Kihei Clark (10.8 ppg, 5.9 assists/g) on the third team. I didn’t assume that was going to be the case.