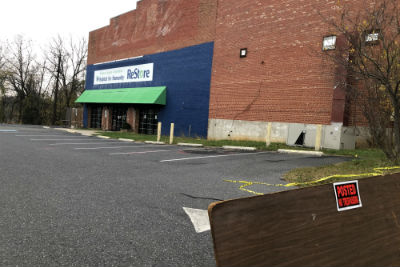 STAUNTON — The smoke is clear, but the damage and the cause of arson remain for Staunton’s Habitat for Humanity ReStore.

At 11 p.m. on Tuesday, Sept. 22, Staunton Fire and Rescue responded to a fire in the ReStore on Richmond Avenue.

“At least nobody was in the store,” said Angela Terry, Staunton-Augusta-Waynesboro Habitat for Humanity ReStore’s director.

According to Terry, the following morning, fire crews returned to 434 Richmond Avenue for another fire in the back of the store.

She added that police suspected arson because the tires on a donation truck were slashed.

The truck’s tires have been fixed, but the store remains closed with smoke and water damage.

Terry said that plenty of volunteers have come forward offering their time to help clean up the store, but Habitat for Humanity will hire a professional company to clean and make repairs.

For now, donations are not accepted at the Staunton ReStore.

Perry Weller, deputy chief of community risk reduction with Staunton Fire and Rescue, said the office has no new update on the cause of the fire.

“We determined the fire was intentionally set, and it’s still under investigation,” said Weller.

Terry said that Habitat for Humanity staff are “staying positive, and keeping going.”

Shopping and donations are encouraged at the Waynesboro ReStore, which opened July 3, 2019, at 252 Arch Ave.

Habitat for Humanity will have a lot of work to do to get the Staunton store reopened next year. The goal is to reopen in six months.

“We’ll have to start from scratch, and get it filled up again,” Terry said.